June is 20th Century month, with every major and some minor auction houses holding a sale. David Rago was first with a 20th Century Design Auction on June 8, 2013. 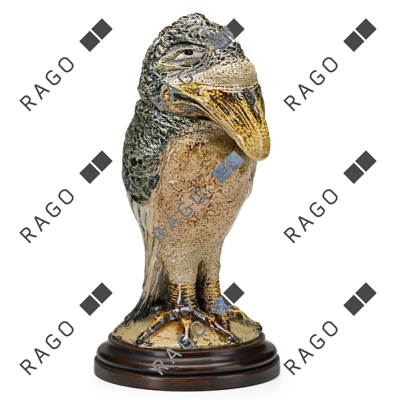 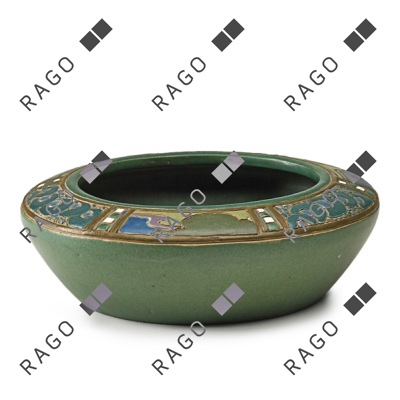 Lot #105, a Frederick Rhead 7¾” diam. bowl, was a pleasant surprise, in keeping with the recent stellar prices for Rhead’s works. It was the top lot of the sale, selling for $55,000, approximately triple its low estimate of $15,000. 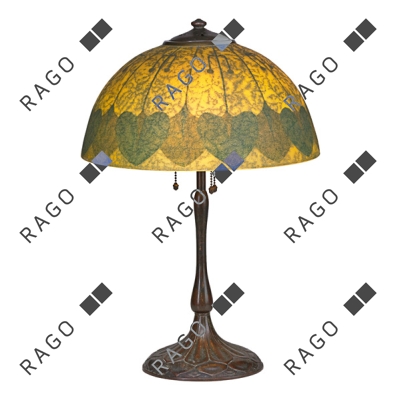 One of the biggest surprises for me was lot #69, a 15″ diameter Handel lamp, with a very simple repeating geometric pattern. Earlier in my career, when I was selling many Handel lamps, I would not have even purchased this lamp, at any price, because it would have been impossible to sell. How things have changed! Now it’s a very desirable Arts & Crafts model that sold for $12,500, against a pre-sale estimate of $7,500 – $9,500. Go figure!

I asked David for some comments about his sale. Here is his reply.

The Saturday session was 89% sold through the day. the first part consisted of 300 lots with an aggregate low of $800,000 and the hammer was $900,000 (plus the bp). The second part had an aggregate low estimate of $150k and it hammered at $245k. total for the day was a hammer of $1,145,000, about $200k over the combined low estimates. The sale felt more than 89% sold because most of the buy ins were insignificant lots, many with reserves under $1k. there was considerable action across the board with 100 phone bidders, 200 internet bidders, a substantial amount of absentee bids, and a full room.

What I found interesting about the sale was that there were few things that really took off (more about that in a minute). Mostly, it was good to very good material performing at or above where we expected it to be, consistently across the board. Furniture, which was the soft spot in our last sale, saw competitive bidding and was almost all sold.

A few pottery lots did exceptionally well. a Redlands cabinet vase with frogs hammered at 12k. a Rhead bowl for University City with a landscape hammered at $44k against a low estimate of 15k. an Ohr vase from a southern estate with a $20 – $30k estimate hammered at $38,000. And the Tiffany lantern attracted wide interest before settling at $22,000.

But again, while the sale lacked some of the six-figure drama of sales past it was something of an auctioneer’s dream in how a great deal of competitive bidding created a fast pace and strong results. The sale sold at nearly 100 lots per hour, above the 80-85 lots we normally see. When this has happened in the past it was usually the result of numerous passed lots (which take very little time). this was the first auction in recent memory to move briskly AND have so much bidding. 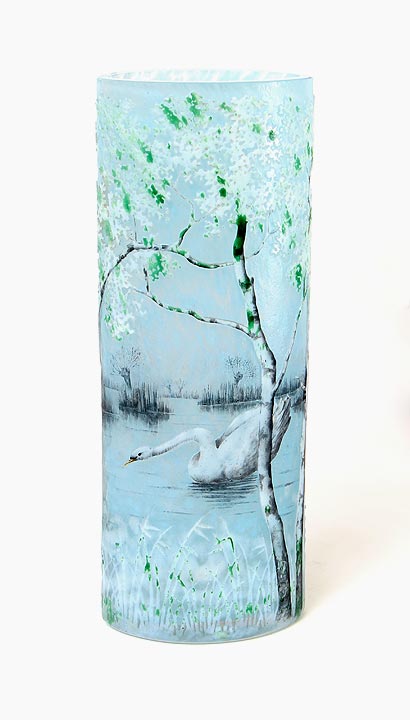 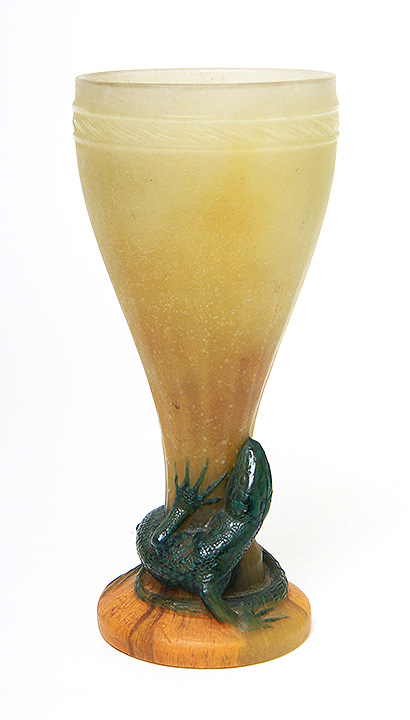 Monday’s blog will be posted by 1 PM.

First I’d like to wish everyone a Happy Thanksgiving! It’s a wonderful holiday, so enjoy it with your family and friends. 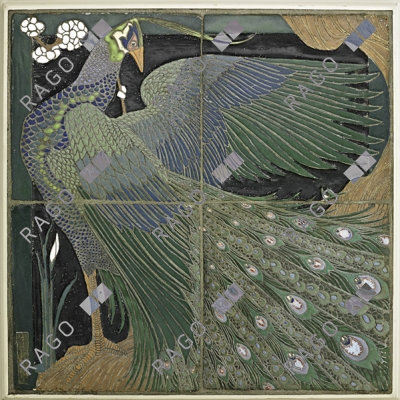 David Rago held a 20th/21st Century Design Auction on October 26-27, 2012, with some results for the history books. Most incredible of all was a Frederick Hurten Rhead four-part tile panel, 20¾” sq., given as a personal gift to Levi Burgess of the Weller Pottery. Estimated to sell for $35,000 – $45,000, it soared to $637,500. A hit-the-jackpot price for the consignor and a record for ANY piece of American Arts and Crafts at auction, ever. 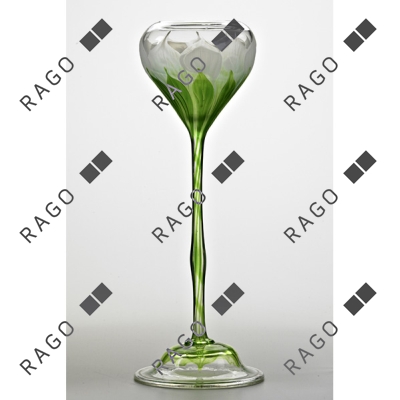 A wonderful Tiffany Studios Favrile glass, wheel-carved, floriform vase was the second best performer of the sale. Selling as lot #932, it realized a stunning final price of $100,000 — almost 20 times the low estimate, including buyer’s premium. What’s even more amazing is that the consignor, a dealer, bought the vase at a country auction two months ago for $75. Now there’s a story he’ll be able to tell his grandchildren! 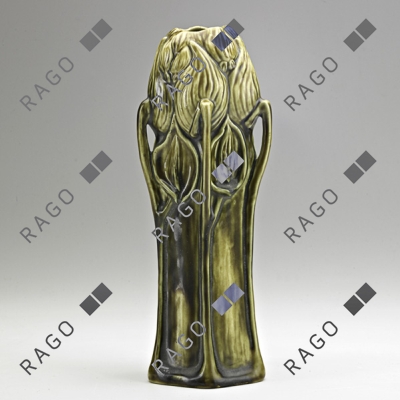 The second-best Tiffany lot of the sale was a pottery vase with milkweed design, with a few minor flaws. Tiffany pottery vases are rarer than glass vases and those with organic designs tend to be the most desirable, so it shouldn’t have been a surprise when it more than tripled its low estimate, selling for $42,500, against a pre-sale estimate of $12,500 – $17,500. But as amazing as the Tiffany floriform vase, this vase was rescued from a New York State home about to be demolished. It was saved from the trash and free. Kudos to the consignor!

For the complete results of the sale, click on the following link. Rago 20th/21st Century Design results.

No more shows in 2012, so we’ll be spending the time buying treasures for the 2013 antiques season which begins with the Birchwood Manor Antiques Show in Whippany, New Jersey, January 5-6, 2013. (We might also find a little time for R&R.) After that we’ll be traveling south for the important Miami shows in late January and early February. In the meantime, we’re still in business, so keep the inquiries coming. Let me know what you’d like to buy, sell or trade. If you need a Christmas present, NOW is the time. I’ll be adding many new items to my website this week. 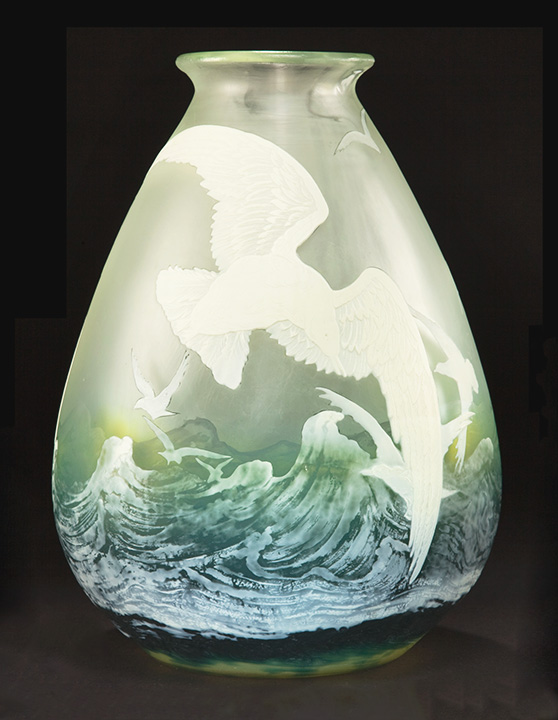 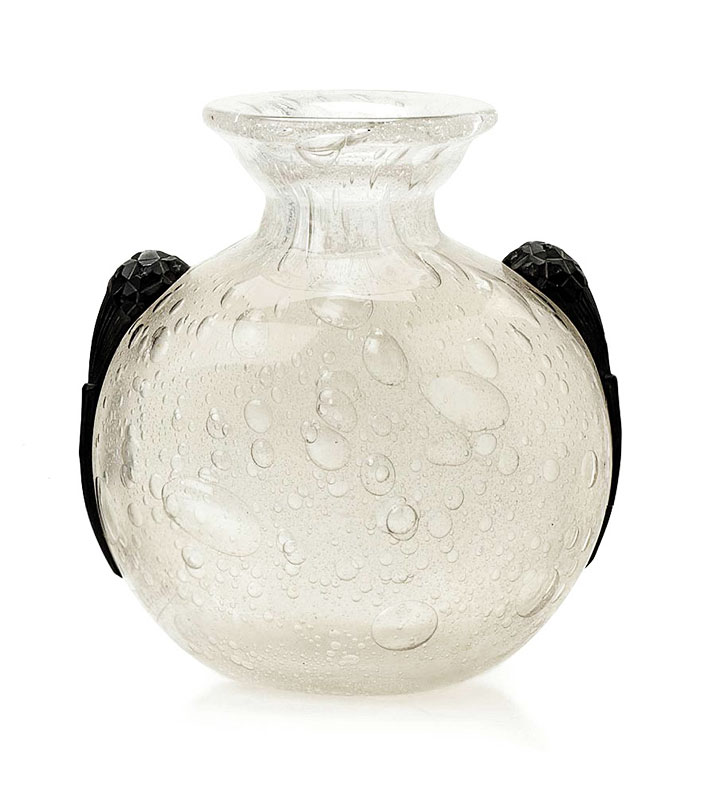