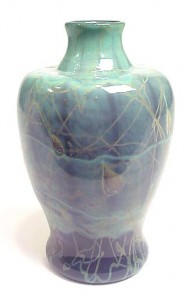 If I post an entry every Monday to Friday, I’ve got to come up with over 250 posts per year, so I need ideas.  Please suggest some to me. This one comes from my daughter, Nicole. She asked me to answer questions that are commonly asked of me at shows. I was asked this question on Sunday at the Redondo Beach Antiques Fair. “How can you tell an etching is authentic?” 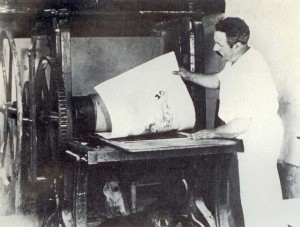 First you have to understand the process of producing an etching. The artist does his work on a copper plate, so the “original” is a copper plate and that’s rarely ever for sale. To produce the image, first the plate is hand-inked. Then the paper is laid down on top and the two pass together through the etching press, under tremendous pressure. The pressure transfers the image to the paper. Since the copper plate has thickness, it “dents” the paper around the edge of the image. This “dent” is called a plate impression. You can see it and feel it around the edge of the plate. So #1. A real etching has a plate impression.

Since the process is not photographic and there is no printing press, there are no dots in the image. If you use a magnifying glass to look at a photograph in a newspaper, you can see the entire image is made up of dots. Use a magnifying glass with an original etching and there are no dots. So #2. An authentic etching does not have any dots in the image.

After the edition is printed by the master printer, it is given back to the artist to hand-sign each one. Prints or other fakes have copies of the signature. So #3. Authentic etchings are hand-signed by the artist, usually in pencil.

In the case of Louis Icart, a raised seal called a blindstamp, was created in mid-1926, and is usually found in the lower left corner, just below the image. Most Icart images produced after this time have the blindstamp, but don’t use this information as a crutch. There are some fake etchings that have fake blindstamps. And conversely, there are many authentic Icart etchings that do not have a blindstamp. Supposedly the etchings without blindstamps were not for export from France, but personally I’ve found too many instances where this rule doesn’t seem to follow.

If you like my blog, please recommend it to others. Email me with your comments and suggestions. philchasen@gmail.com 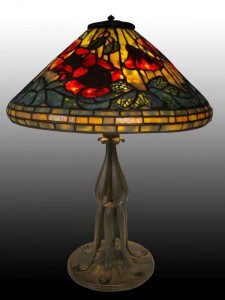 Everyone likes to hear stories about a “score”, so I’ll tell you one of mine.

About 10 years ago, my wife and I were in Paris, buying antiques at the flea market. There are many flea markets in Paris, with different qualities at different markets. We were spending a lot of time at one of the better markets. Lia likes to spend time rummaging through the lesser markets looking for fun collectibles. By late afternoon on Sunday, she was quite annoyed with me for not spending time with her at the other markets. So, reluctantly, we left for another market. After going up and down a few aisles, we weren’t successful, so Lia wanted to leave. I suggested that we look at one more aisle as I thought there was a certain dealer that we might have missed. Immediately upon turning the corner, I noticed what appeared to be a Tiffany lamp in the first booth. I walked up to the lamp and mouthed to Lia “It’s real”. I asked the lady tending the booth for the price. She told me the price in French francs, which converted to approximately US $4,000. Wow! I knew I had found a score, but I wasn’t sure how good. I bought the lamp.

When I got back to my hotel room, I called Sotheby’s in New York and to my surprise, Barbara Deisroth, the head of the 20th Century Antiques Department, answered the phone on a Sunday. I explained that I had just bought a Tiffany 17″ diameter Poppy table lamp on a tree trunk base. She said she’d like to have it for their next sale, so I brought it back to New York and consigned it to Sotheby’s. The estimate was $20-25,000, with a reserve of $20,000. The auction was in December and again to my surprise, the lamp did not meet reserve and did not sell. It was returned to me. I had to pay some fees including photography and insurance.

I then brought the lamp to Florida to exhibit it at the Miami Beach Antiques Show the next month in January. During set-up, another dealer came into my booth and inquired about the lamp. I told him the complete story of how I had purchased it, consigned it to Sotheby’s and had it returned to me. I told him the price was $25,000. We negotiated for a while and agreed on a price of $22,500. Not bad for a $4,000 investment.

It goes to show you how important knowledge is. Thousands of people had walked past the lamp in the Paris flea market and assumed that at a price of $4,000, it had to be a reproduction. It was a late example of a Tiffany Poppy lamp, when Tiffany Studios had stopped making their own glass. They were purchasing lower quality glass from outside suppliers and assembling the lamps themselves. The glass wasn’t very pretty, compared to earlier Tiffany lamps, but it was authentic. Score one for Philip!