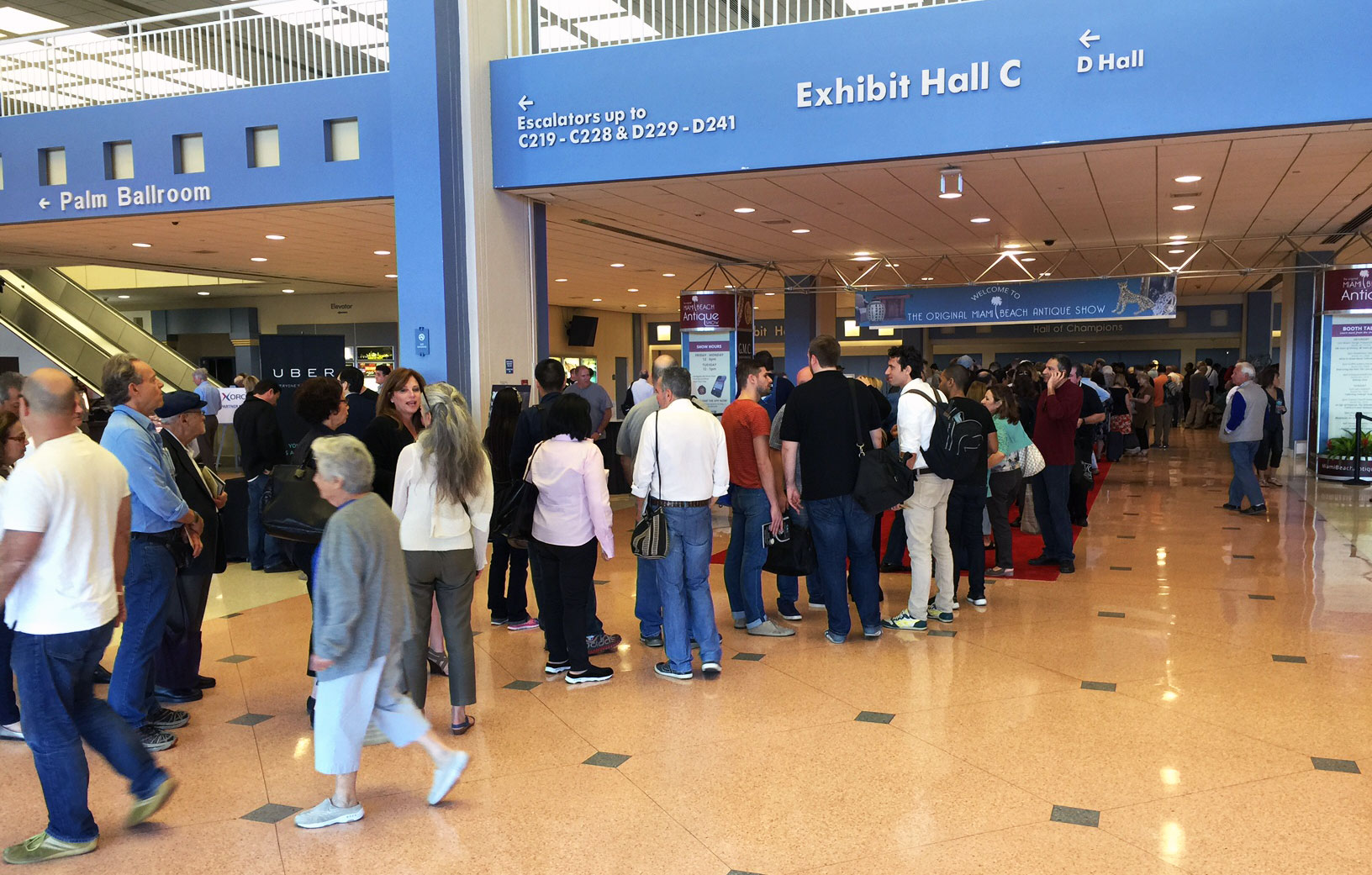 Yesterday, February 3, 2015, the Original Miami Beach Antique Show finished its 5-day run. The crowds were smaller than usual, but included many serious buyers. (At least that’s the way I perceived it.) Most dealers I spoke to did well, but there were some disappointments. 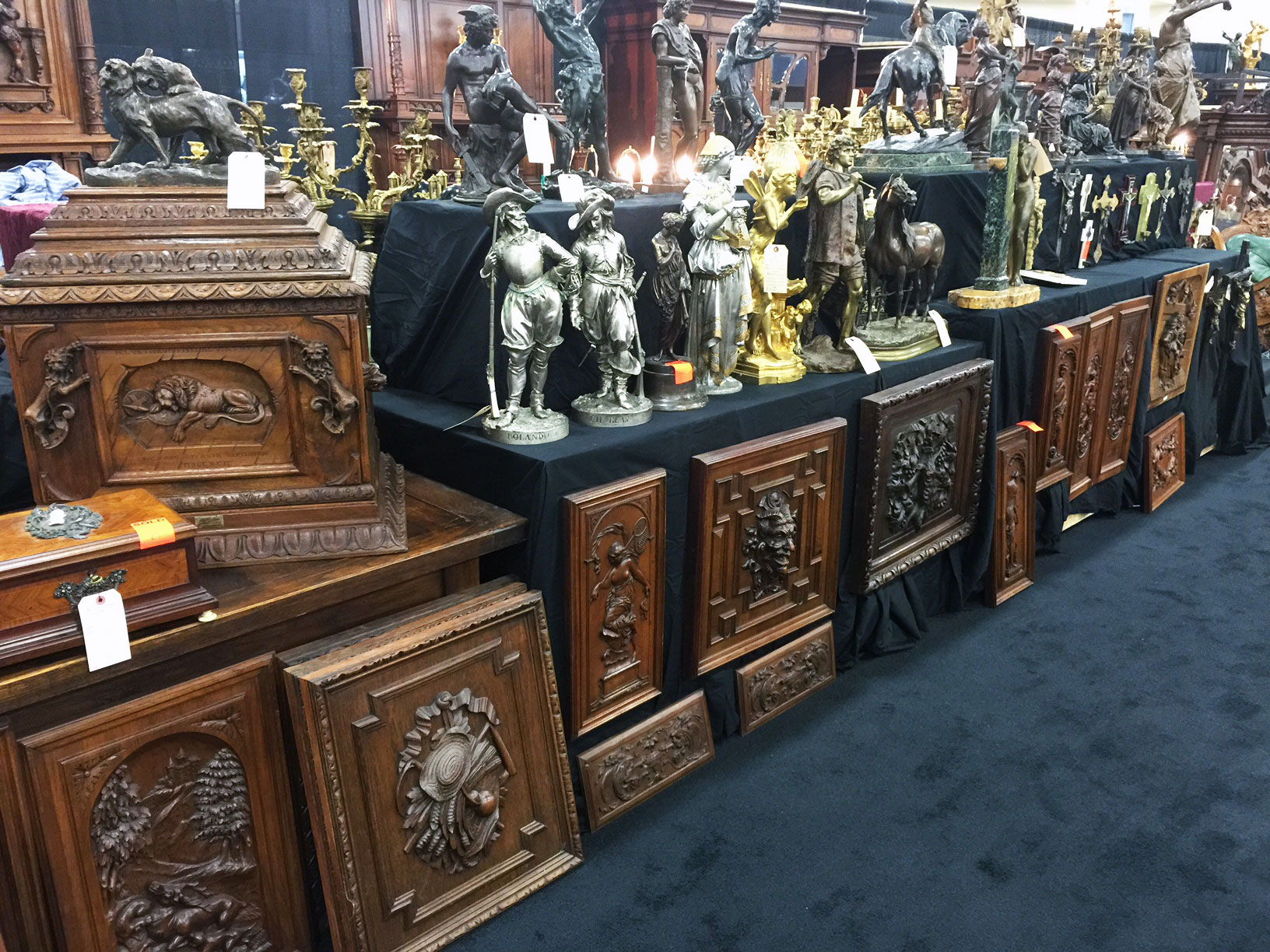 There were lots of sold stickers at Best of France

Following are comments from dealers I know personally. It is not a representative cross-section of the dealers at the show. Jack Papadinis, Jack Pap Antiques, West Simsbury, CT, a dealer in 20th Century lighting & decorative accessories, commented “Overall it was a quieter pre-show and show, compared to last year. I sold more expensive items pre-show to other dealers. The crowd was somewhat lackluster, however several customers made the show profitable.” Butler & Butler, Sarasota, FL, 19th Century general dealers, were quite enthusiastic. “It was one of our best Miami Beach shows. We restocked our stand several times.” Ron Greenwald, Greenwald Antiques, Cleveland, OH, general dealers, was equally ebullient. “Strong. The energy was great. Saw old and new customers. We sold up to the last minute.” Xavier Eury, Nancy, France, French cameo glass dealer, was pleased. “My show was pretty good. Most of my clients were South American.” Dean Lowry, Dean Lowry Antiques, Gulfport, FL, lamp dealer, told me “It was a good show. Traffic was down, but we picked up several new clients. Business was down from last year, but we were still satisfied.” Jack Ophir, Ophir Antiques, Englewood, NJ, 20th Century decorative arts dealer, remarked “We had a very nice show. We sold good Art Nouveau lamps and objects, including a Loie Fuller lamp by Raoul Larche and an important vase by Camille Fauré.” Bill Holland, hollandarts.com, West Chester, PA, dealing in the works of Louis Icart and Louis Tiffany, commented “Quality items sold. Low-end items not as much. I did about the same as last year. I was happy with the show.” Rick Kaplan, Rick & Robert Kaplan Antiques, Palm Springs, CA, general dealers, seemed pleased. “We did well — pretty much the same as last year, which was good.” And lastly Larry Zinzi, Lawrence J. Zinzi Antiques, Bronx, NY, general dealer specializing in the works of Louis Tiffany, was disappointed. “It was fair. Europeans didn’t show because the euro was weak. The Tiffany market is still good. I sold four lamps, but business was down from last year.” 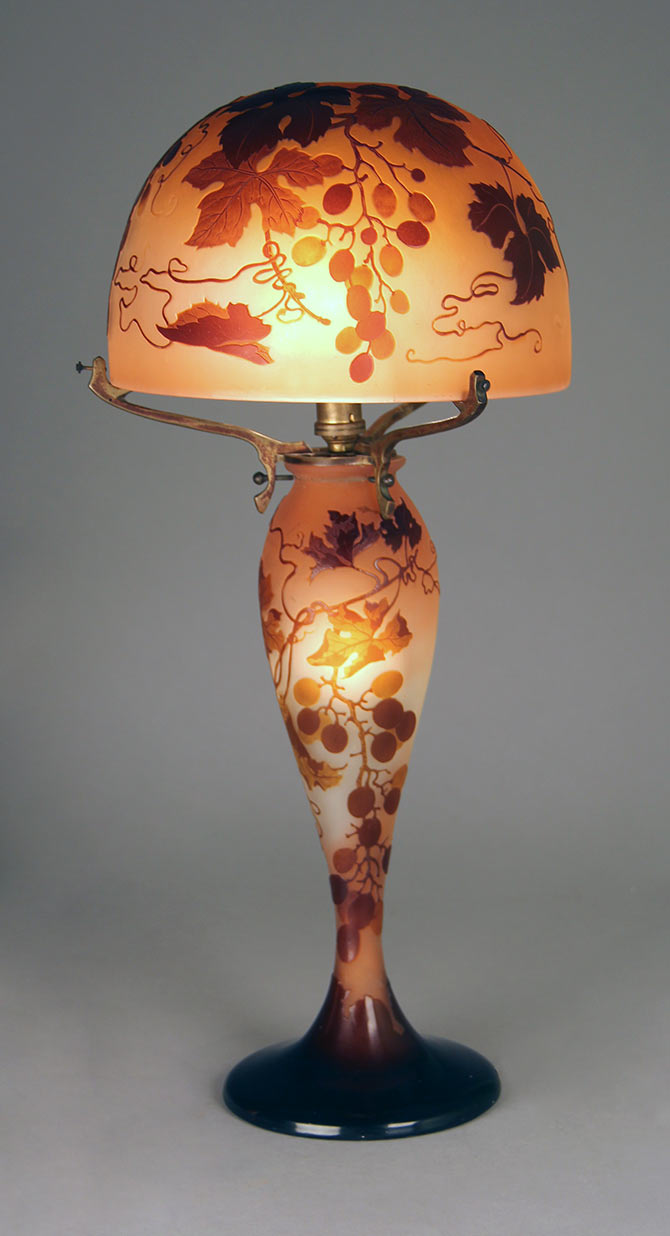 We sold this lovely Gallé table lamp at the show

Personally I feel like I’ve died and gone to heaven. After a fabulous show at the Miami National (Airport) Show last week, we did very well at this show — much better than last year. Business to the general public was better than last week, but sales to my private clients was down. French cameo glass continued on fiyah! (that’s fire for those who need translation). I cannot think of another show, ever, where more cameo glass was sold, not just by me, but by all the dealers.

Next year the show returns to its usual starting day of Thursday and that’s a good thing. The show will move to the Washington Ave. side of the building, halls A & B, while renovations are underway to the west side of the building. I suggest to you dealers who missed the Miami Airport Show the week before that you reconsider for next year. There were a lot of smiling faces at the end of that one.

This week we’ll be in Naples, Florida for the Naples Art, Antique & Jewelry Show. It will be our first time there and we’re expecting good things (especially after the good business in Miami). We visited last year and were pleased with what we saw, so we decided to give it a shot this year. If we do well, we’ll be back next year. If not, we’ll vacation, as we’ve done in the past.