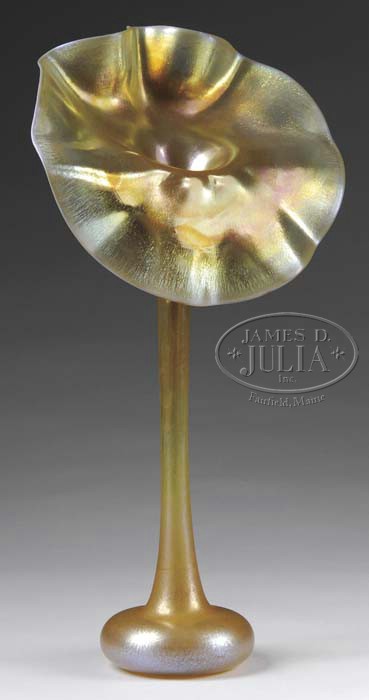 James D. Julia, Inc. held their annual June Important Lamps and Glass Auction on June 22-23, 2010. I asked Jim to write some comments about his sale. His response appears in its entirety at the end of this blog post.

The sale was divided into many categories, some of which were soft, including Lalique, Wedgwood Fairyland Lustre, KPM plaques and French cameo glass, while others fared better, including Tiffany Studios items. Individual items excelled, even within weak categories. Many of the items that failed to reach reserve, and therefore did not sell, were a result of estimates that were too aggressive. I’ve repeated this point time after time — low estimates create interest and encourage bidding. The problem occurs when consignors insist on aggressive estimates and high reserves. What should an auctioneer do? He’s caught between a rock and a hard place. Should he accept the consignment and risk that the items won’t sell? There’s a lot of time, effort and money invested in items that don’t sell. Or should he not accept the consignment and possibly lose out on commissions? Tough choice. The correct answer depends on market conditions that change regularly. It would be wonderful for all involved if an entire auction had low estimates and no reserves. That rarely happens today, as most consignors are not willing to gamble.

Julia’s auction is located in central Maine in the town of Fairfield. It’s a bit off the beaten path, about halfway between Portland and Bangor, just off exit 133 on I-95. Jim bends over backwards to encourage bidders to make the trip to Fairfield to attend the auction in person. He understands that live, in person, bidders are more valuable to the success of an auction than phone, Internet or left bidders. Julia’s offers incentives like free hotel rooms, free dinners, and free food at the auction. Even with those incentives, the crowd averaged only about 30-40 each day. The slack was taken up mainly by interest from the phones and the Internet. 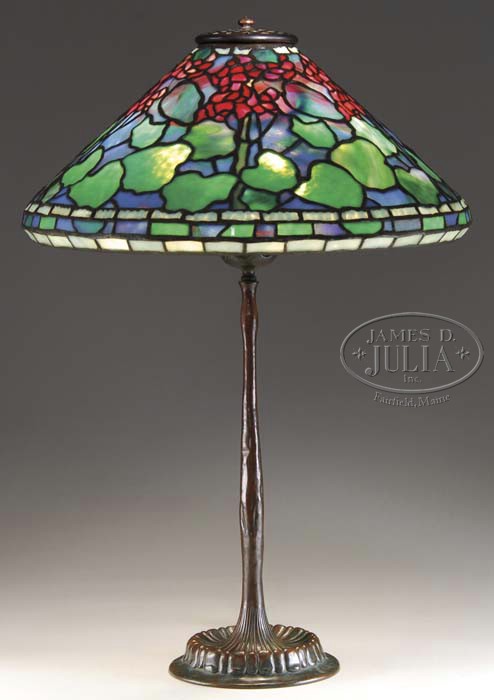 Tiffany Studios items were well represented in the sale, with the top seven lots all being Tiffany lamps. A pretty Tiffany 17″ Geranium lamp, lot #2315, was estimated conservatively at $30-40,000. As a result, there was considerable interest from many telephone bidders and the audience. A dealer, bidding on the telephone, was the winner, paying $63,250, including buyer’s premium — a result that easily exceeded the high estimate. 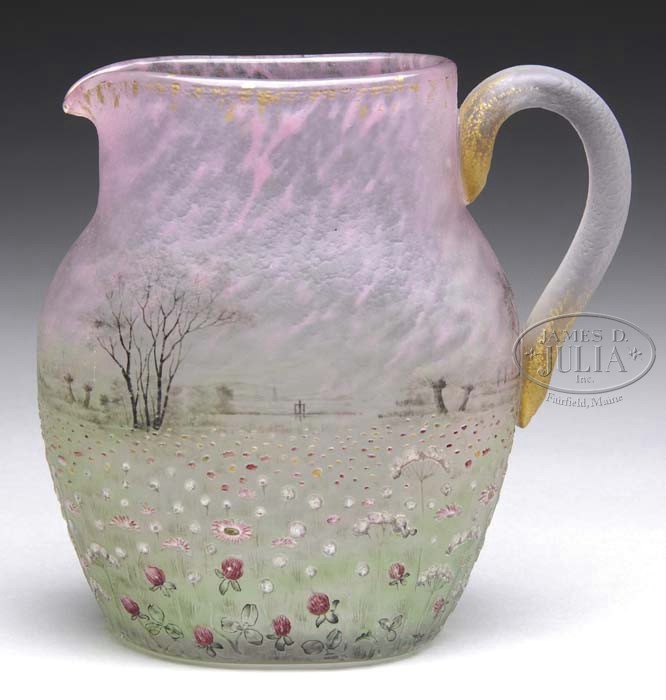 Use this link to view the results of the entire sale. Scroll down the page and click on what interest you. You’ll have to register online before you can see the results. Registration is free. Julia’s June Lamp & Glass auction results.

Following are Jim Julia’s comments about his sale.

For the past few weeks leading up to our auction we have been filled with pride, anticipation, and trepidation. Pride because we had been told on numerous occasions that our upcoming glass and lamp auction was probably the largest, finest and most diverse grouping of this type that has been offered at any one auction anywhere in the world for the last couple of years. Anticipation because we had a considerable amount of monetary value and thus had the potential for doing well. Trepidation because this is a different world today the economies of the world’s and the collecting fraternities of the world’s are no longer what they were three years ago. This is a buyer’s market not a seller’s market and its exceedingly difficult to predict what is going to happen. We of course knew that because this was such a high-profile auction a great number of collectors would be watching its performance. If we were successful it would bode well for our company and for the glass and lamp collecting fraternity as a whole. Healthy prices create a sense of assurance and confidence for collectors to buy. Very poor sales results would serve as a depressing factor for the collecting fraternity as a whole. It’s important to note that our auction was not a huge accumulation of modernism, art nouveau and art deco that happened to include a few highly select and rare lamps and/or glass objects (truly rare, highly important and very valuable collectibles still tend to bring very strong prices). Our auction was a true cross-section of the art glass and lamp marketplace. It consisted of objects that would normally be found in the booths or shops of leading art glass and lamp dealers throughout the world. As such, the value ranged from a few hundred dollars to a hundred thousand dollars plus and included art nouveau, 20th century American art glass, paperweights, KPM plaques, lamps of all types, miniature lamps, French and English cameo glass, Fairyland Lustre, etc.

We are proud and pleased to report that our auction was a success. Gross sales were just under $2 million and with the normal post-sale buying that takes place the week following an auction, the total gross should exceed $2 million. In addition there were some healthy prices; the most exciting of which were for desirable items that carried very realistic and/or conservative estimates. One of the most critical factors at auction in a down economy is not only the importance of quality offerings but more importantly realistic and conservative estimates. The more conservative the estimates the greater the interest in the object and the more likely it would do well when sold. Just as prices on the stock market readjust in new economies the same thing happens in collectible markets. One of the most difficult things in a down economy for an auctioneer is to try to figure out what the new market level is for various collectibles. Just because the consignor bought the object three years ago for a lot of money or because they were offered a lot of money for it four years ago or because someone sold a similar one five years ago for a lot of money, has nothing to do with the value of land in Florida, Handel lamps or G.E. stock today. The value of any object today is what the current market will bear, which in many cases is less. If G.E. stock (which used to trade at $38 but now is trading at $16) is offered at the former value of $38, it will not sell. It is no different for a Handel lamp or a KPM plaque; these things sell but only at current market value, not the old market value. Those consignors who insisted on aggressive reserves and/or high estimates in economies such as this will frequently be dismayed with the financial results. High reserves (and thus high estimates) simply disparage bidding participation and thus garner a low rate of return. Conservative estimates and reserves result in maximum participation, which in turn results in the greatest amount of the competition which therefore will result in the greatest rate of return.

There are always surprises at every auction which include bargain prices as well as some items which over perform. A beautiful American contemporary leaded table lamp estimated at $8,000-$10,000 sold for just under $20,000.

One last point about the collectibles fraternity today is that it doesn’t matter if you collect Galle, Tiffany lamps, rare toys, fine art or furniture; an important point to remember is this is a buyers’ market. Consequently, there are consistently great buys available at auctions, shows, and shops. This is the best time in a collector’s life to be adding to their collection. During a sellers market as we’ve experienced for a number of years there is so much competition that there are rarely any good buys. But in a buyers’ market, prices tend to be lower and there are consistently bargains available. This is a fabulous time for collectors to be expanding their collection. Smart buyers in the stock market such as Warren Buffett take advantage of buyers markets to expand their holdings. Smart collectors take advantage of buyers markets to expand their collections!

Hope to see you at the next auction!