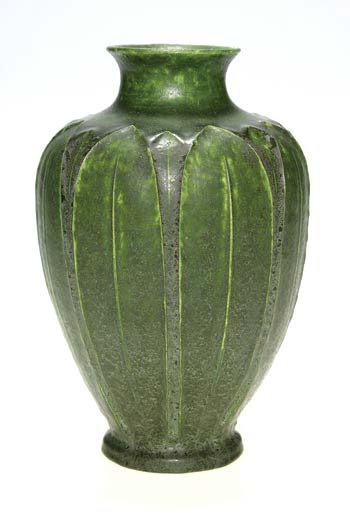 I exhibit at shows around the country and one question that is often asked of me is “How do you get these things?” Well, here’s one day in my life that will partially answer the question.

Yesterday, Saturday, was planned in advance. There were three auctions around the country where I was going to bid. That’s usually a simple matter of arranging with the auction houses to leave bids (called absentee bids) or bidding on the telephone. I don’t usually like to leave absentee bids because a dishonest auctioneer can run the bid, which means he will execute the maximum bid, rather than bidding competitively with the audience. An honest auctioneer won’t do this, but even after many years in the business, it’s difficult to ascertain the truly honest ones. I will leave absentee bids at auction houses that have proven their honesty to me.

So far, so good, until a fly got into the ointment. One of the auctioneers changed some of the usual rules. He decided not to permit any phone or absentee bids whatsoever. From a business point of view, that doesn’t seem to make any sense. There are bidders who don’t have the ability or the desire to travel big distances to bid on an item. This auctioneer was closing the door on all bidders around the United States and the world, who were not within traveling distance. That makes even less sense in today’s Internet world, as bidders from remote locations have the ability to find an item and bid on it. Auctions are supposed to be competitive events where the highest bidder gets the item. To be fair, there is something positive to be said for this rule change. Those people who are willing to travel to personally attend such an auction are qualified and determined. After making the trip, they’re not going home empty-handed. They’re going to bid strongly, including on items they didn’t intend to until they showed up in person.

OK, back to Saturday’s plan. My wife and I were willing to drive 4½ hours to upstate New York to attend an auction with six Icart etchings, a Gallé faience vase and a Rookwood iris glaze vase with fish. The logic was that I’m a strong bidder and there was a decent likelihood that I could go home with most or all of these items at good prices. So we left Long Island at 10:45 AM and started driving upstate. At about 11:30 AM, I got a call from auction house #1 and successfully bid on a fine Grueby vase (see photo above), but was forced to pay more than I had originally planned. But the vase is such a nice example that I’m happy to get it.

We arrived at the auction house in upstate New York at about 3:30 PM and viewed the items. They were as represented, so now we had to amuse ourselves until the auction started at 5 PM. Unfortunately there was nothing in the area to do, so we aimlessly drove around until the auction began. In the meantime, auction house #1 called again for me to bid on a very nice Gallé vase. The estimate was $1/1500. I was prepared to bid $1800 plus the buyer’s premium, for a total of about $2100. The bidding began at $500 and I bid $550 and then, amazingly, the bidding stopped. I bought the vase for $550 + buyer’s premium, for a total of $649. ?#%@#&?? I never look a gift horse in the mouth and this was a nice gift. 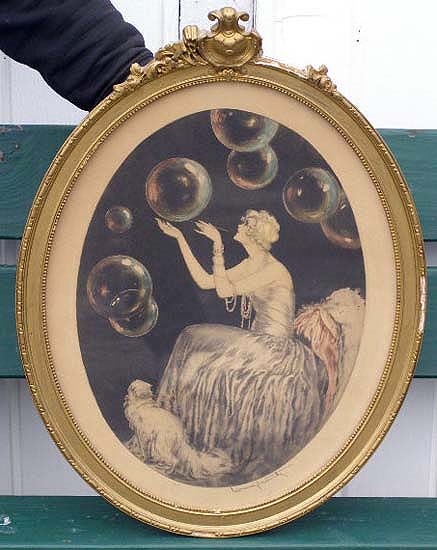 Back to the live auction. First came the Gallé faience vase, a large early example that ordinarily I would have no interest in. This vase was for collectors of Gallé esoterica, and I don’t know many such collectors, so I wasn’t going to bid much. I was outbid and relieved. Then came the Rookwood vase. Rookwood sales have been few and far between recently, so again I wasn’t going to bid a lot. I was outbid again. Then at 6 PM, the auctioneer began selling the Icart etchings. First up was the best one, Bubbles. I had hoped to buy it in the $1,500-2,000 range. I bid $3,000 and was outbid by a young couple in the back, who paid $3,100 + buyer’s premium, for a total of $3,472. Disappointment! Pals, another good one came up next. Again outbid by the same couple. Drats! The third one was Silk Robe, another good one. Same result. Triple drats! This evening is not going quite as planned. I started thinking I was going home with nothing when Orchids came to the auction block. This time I was the successful bidder. Yay! Mockery and Don Juan were next and I was able to buy both. The trip wasn’t a total waste. 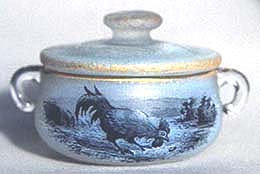 Daum Nancy covered salt, similar to the one sold at a Florida auction

We were able to leave fairly early at about 6:45 PM and started driving home, though at times through torrential rain. At 8 PM, auction house #3, in Florida, called me to bid on a Daum Nancy covered salt. It was the only good item in a small auction. It wasn’t well advertised and I only found out about it because the auctioneer sent me an email asking for an authentication. So I knew I could sneak up on this item and get it for a bargain. Wrong!! Again outbid, as the salt sold for $1,232.

Home at 10:45 PM, 12 hours after we left. Expenditures — 12 hours time x 2 people, gas, tolls, wear and tear. Bounty — 1 Grueby vase, 1 Gallé vase, 3 Icart etchings. It looks so easy when people visit us at shows and see all the merchandise nicely set up. Multiply this story by the hundreds of items that we display and you have a partial answer to the original question, “How do you get these things?”

Today I’ll be adding to my website several new Galle vases that I’ve recently acquired. I added a few the other day and today more. Please take a look. Click on this link chasenantiques.com.