Christie’s New York held an Interiors sale on March 2, 2010, where lower-end items are sold, mostly from estates. These lower-end items would be considered higher-end at many other auction houses, but not at Christie’s or Sotheby’s. Included in the diverse sale were 27 lots of French cameo glass, many still left from the vast collection of Simon Pinhas. The results were strong, with a few of the lots bringing exceptional prices.

Lot 225 was a Daum bowl with a desirable herons in flight decoration. Medium size at 5″ tall, it was estimated at $2-3,000. On a good day, it should have sold for a maximum of $10,000, but on this day it sold for $32,500, including buyer’s premium — 10 times the high estimate. That’s impressive. Helllooo, bidders at Christie’s. I’ve got some really nice French cameo glass for sale for a lot less money. 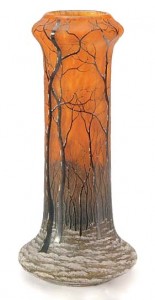 Daum winter scenic vases have been desirable for many years, usually commanding a premium over other scenic vases. But on March 2nd, the premium got a lot higher. Lot 217 was a nice Daum winter scenic vase, 10″ tall. It carried a pre-sale estimate of $2-3,000 and should have sold for two or three times the high estimate. Bidders on this day pushed the price to $20,000, including buyer’s premium — an outstanding price for a winter scenic. 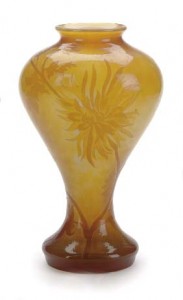 The party continued with a few lots of French cameo glass in the 20th Century Decorative Art & Design sale of March 16, 2010. Several items brought exceptionally strong prices, starting with lot 25, a Gallé fire-polished vase, 12″ tall. To my eyes, the vase was nothing exceptional and should have sold within the pre-sale estimate of $4-6,000, but apparently the bidders disagreed. They pushed the price to $30,000, including buyer’s premium.

Several other lots soared past their pre-sale estimates, including a Daum winter scenic vase in the style of Muller at $30,000, a monumental Muller vase with poppies at $35,000 and a Daum Art Deco vase with wheel-carving at $37,500. It’s a pleasure to see such strength in the French cameo glass market. Hopefully it will be felt everywhere, not just at Christie’s.