Heritage Auctions, the major Dallas, TX auction house, held their first auction of 20th Century Decorative Arts in New York on December 10, 2009. Results were generally poor in the lamp and glass sections of the auction, with many lots not reaching reserve. Heritage had hoped to break into the New York market and become a major player along with Christie’s, Sotheby’s and Bonham’s. It’s difficult to ascertain the exact reasons for the poor showing, but a few things are clear. First, they did not have a compelling group of items to sell. A fresh collection of important items at low estimates and reserves would have been a good way to kick start their New York presence. Unfortunately that was not the case. Secondly, they do not have a permanent exhibition space. They rented space from Tepper Galleries on the third floor of a building on East 25th St. — not an easy location to find. Third, they tried to enter the New York market in a difficult period in the economy. Heritage is a major auction firm primarily selling coins. They branched out into several antiques markets, some with excellent success, such as American Illustration Art. Perhaps they can crack the New York market, but they will have to upgrade their offerings and lower the estimates and reserves — a difficult task. 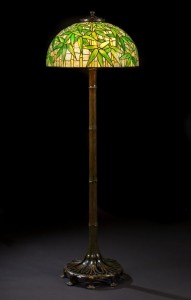 Tiffany lamps sold poorly, mostly because of too aggressive estimates and reserves. One of the major lamps of the sale was a Tiffany Studios Bamboo floor lamp. It was estimated at $200-300,000 and did not sell. 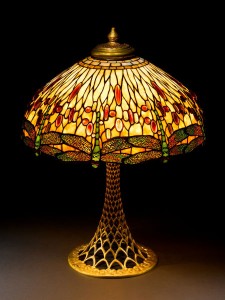 Another major lamp that did not sell was a Tiffany Studios 22″ Dragonfly table lamp on a rare reticulated base. It was available for sale after the auction for $179,250. 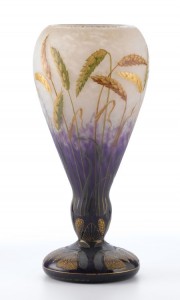 French cameo glass also did not fare well. Many of the vases did not sell but a few did. Lot 75144 was a Daum acid-etched and enameled vase with wheat decoration. It carried a pre-sale estimate of $8-12,000 and sold for $9,560, including buyer’s premium.

I’m taking a lot of time to add new items to my website. I’ve already listed new items under Gallé glass (including a blownout vase), Daum Nancy glass and Tiffany Studios glass. Soon I’ll be adding many Tiffany Studios desk pieces. Many are priced right for great holiday gift-giving. Who wouldn’t like to receive a genuine Tiffany desk set accessory as a Christmas or Chanukah gift? I’ll soon be starting a big sale on Icart etchings. Please take a look, as every day I’m adding more. Click on this link chasenantiques.com.