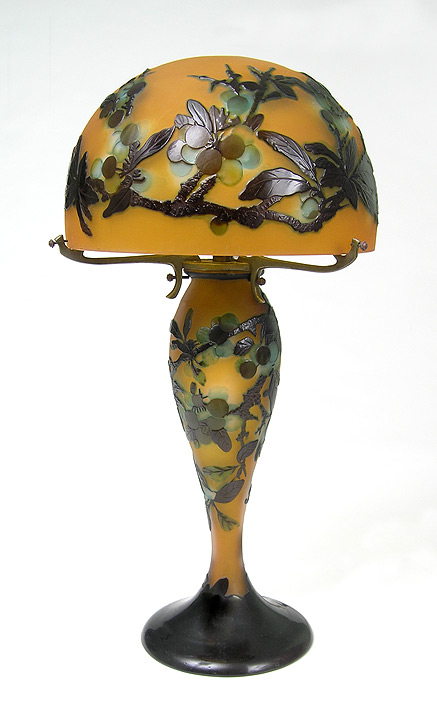 Tastes in French cameo glass have changed considerably over the last 35 years as the buyers have changed. At first, American buyers were more interested in Gallé than other makers. In retrospect, it appears that it was just naivete. They didn’t yet know much about other makers. When the Japanese started buying heavily in the late 1980s, their tastes changed the market. They were willing to pay a premium for sophistication – techniques beyond the basic of acid-etching, like wheel-carving, or applications. The market changed once again in 1990, when the Japanese dropped out suddenly, as their real estate bubble burst. American taste moved to the forefront again. But now, there was more knowledge available from multiple resources, including new books, more dealers and of course, the Internet. 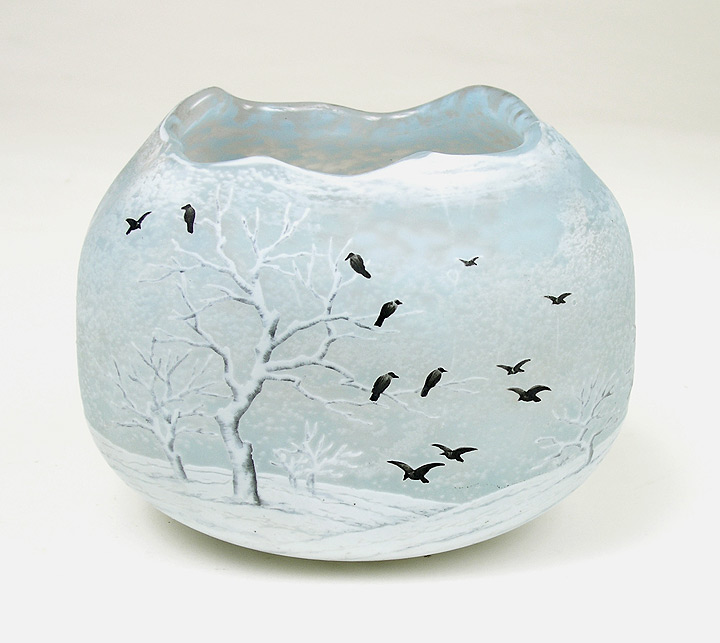 So what is modern American taste? The keyword now is pretty. Americans appreciate pretty more than sophisticated. That fundamental shift has caused the value of many Daum Nancy acid-etched and enameled items to go up in value while wheel-carved and applied items have either stagnated or gone down in value. As a result, the balance of interest has shifted 55/45 to Daum. The same characteristics apply to Gallé. The item has to be pretty, which usually means a nice shape, together with brighter colors, like red, blue, purple, pink and yellow. Brown seems to be one of the worst colors. Gallé produced many vases in the green and brown family, which have moved down the totem pole and are difficult to sell.

The change in American taste has created an interesting anomaly – vases that took much longer to produce from highly skilled workers are priced lower than simpler, but prettier vases. It’s similar to the stock market – there is currently an opportunity to buy a segment of the market that is out of favor. Will it come back into favor? Who knows? All is takes is a determined few to start collecting these items and the market will reverse. I recommend the purchase of these items for their beauty and importance. If they also happen to go up in value, that would be a nice bonus.

I haven’t mentioned any of the other French cameo glass makers as there isn’t much interest from Americans. To be fair, there is a decent amount of interest in Muller, the number three maker of French cameo glass. Then in order, there are D’Argental, deVez, Legras, Richard, and a few others. I rarely offer their works for sale as there are so few collectors. The quality of some of these makers, like D’Argental, is quite good, but often the colors are not appealing.

Most weeks I will now be posting a new blog on Mondays only. Occasionally I will add a second one, usually on Thursday. Unfortunately, I don’t have the time to post more often. I might try posting a video blog on youtube, but I just have to get over the inertia of doing the first one.

If you like my blog, please let your friends know by sending them a link. Then check out my new Tiffany, Daum, Gallé, Webb and R. Lalique acquisitions. I’ve recently listed many of them on my website, including Daum swans, rain, a Gallé lamp and a monumental red vase — more each day, plus a killer red Tiffany Favrile vase and a millifiori vase. Here’s the link. chasenantiques.com

3 thoughts on “The changing market in French Cameo Glass”