The results at Rago Auctions on October 1, 2010, showed just how much the public appreciated the assembled variety of pottery, glass, lamps and furniture. Many of the items were high quality and fresh to the market — a combination that’s hard to beat. Talk of recession is finished. Now buyers have to compete strongly for the best merchandise. 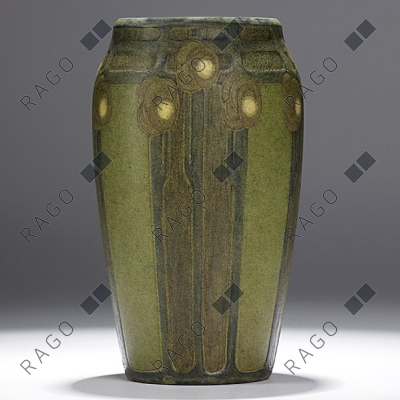 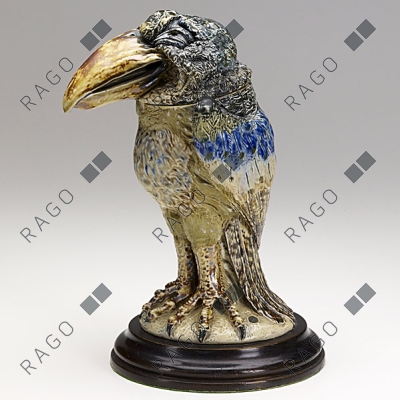 The Martin Brothers of London and Southall were nicely represented with nine lots, six of which were the very desirable bird tobacco jars. Four of these birds were among the top ten lots of the sale. Lot 209 was estimated to sell for $17,500-22,500. It doubled its estimate to sell for $39,040. Again damage didn’t seem to be much of an issue. The public was looking for excellent examples and they weren’t going to be deterred by a few chips or hairline cracks. Ceramics buyers are much more tolerant of condition issues than glass buyers. 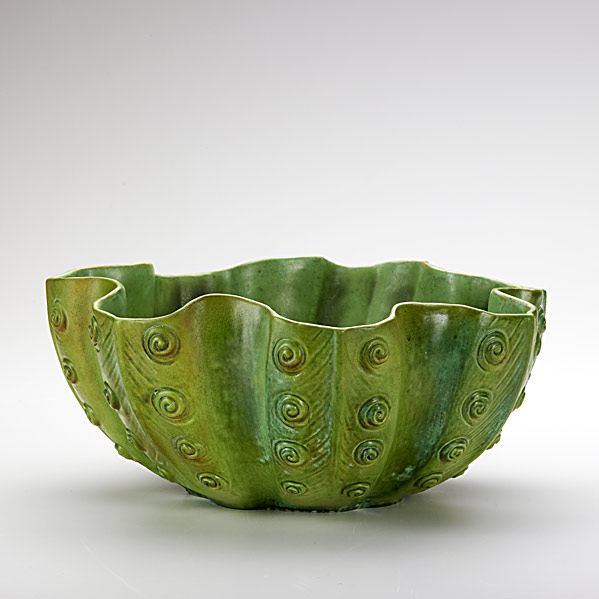 There were more than a couple of lottery winners at this auction. Lot #463 was a rare Tiffany Studios pottery bowl with fern decoration, the only example known. It was recently purchased at an estate auction in Pennsylvania for $115. It sold for $25,620, against a pre-sale estimate of $15,000-20,000. Not a bad day’s pay.

I emailed David for his impressions of the sale. Here is his reply.

“We were surprised by how strong the Tiffany and Lalique performed in the sale. I knew the material well enough to understand it was unusual, but not nearly enough to think it could take off. The first Tiffany glass lot, the early blue vase (lot #473, $23,180), both the consignor and I thought wasn’t even Tiffany. That collection of glass (and including the large jeweled desk set) did more than double what we told the consignor to expect. The Tiffany pottery fern bowl was recently purchased by the consignor at a local auction for $115 and I knew it would do well, but the $25k was above our expectations. And the Tiffany sketch book, from his trip up the Nile in 1908, passed but sold after the sale. That was a surprise because there were like 28 sketches in the book which, individually, had to be worth $1500 – 2k each on the average and the reserve was $35k. And I’m thinking that the book, as a whole, is worth more than the sum of its parts.

I’m still not sure about the Lalique and why the prices, especially for the jewelry, were so high. There must be a new buyer or three out there focusing on that niche and driving the prices. In any case, we had most of them in for $1000 – 1500 and many brought from about $4k to 11k including premium. The only sour note was again the non sales of tired dealer merchandise (lamps mostly) that were taken in at fair prices but didn’t sell for the same reasons the dealers who consigned them couldn’t sell them. Estate lamps, like our daffodil? It’s like buyers have a sixth sense for what’s new to the market and there to be sold (that brought 40k…) on top of that, we ended up having to pull the Tiffany parasol lamp because the base was doctored. We had a buyer in Europe who left a covering bid and a serious buyer on the phone from the east coast, so it was more than sold. But we have no interest in getting behind a piece with problems. The auction as a whole was over 80% sold for the weekend and hammered in estimate range, totaling (with bp) over 5.5 mil.” 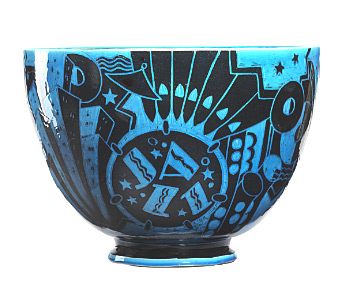 I would be remiss if I didn’t mention another wonderful story from the next day’s auction. A picker had found a Cowan Jazz bowl and brought it to a Rago Monday appraisal day. It had been used as a planter, so it was very dirty, with mineral deposits to the interior glaze at the bottom and two hairline cracks to the rim. The picker wanted a $5,000 reserve. He was advised to permit Rago Auctions to clean and professionally restore the bowl. The bowl was presented at auction with all the details of the restoration. It carried a pre-sale estimate of $20,000-30,000 and sold for $158,600 — a fantastic price, but below the more than $200,000 for another example that previously sold in perfect condition. According to David, the result will make an important impact on the quality of the consignor’s life.