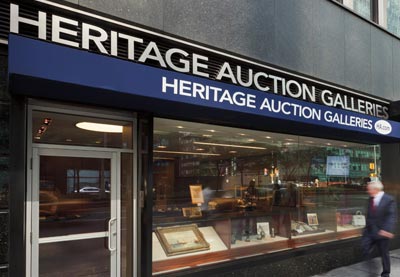 Heritage Auction Galleries of Dallas, Texas, opened a new gallery in NYC on September 1, 2010. It is located at 445 Park Ave. and 57th St. — a prestigious location. The location will feature a rotating window featuring selections from upcoming auctions.

Heritage is now the third largest auction house in the world with total sales of more than $600 million, behind only Sotheby’s and Christie’s. Heritage started their auction business solely with coins, but has gradually expanded into many other categories. Rather than compete toe to toe with their larger rivals, they have cultivated specialty auctions such as illustration art, comic books and sports collectibles. This strategy allows them to compete in areas where the major auction houses are deficient.

I requested comment from Heritage regarding the opening of their new gallery and received this response from Greg Rohan, President of Heritage Auction Galleries.

We certainly don’t expect to be compared with Christie’s or Sotheby’s; that’s not our business model. We have a large headquarters building in Dallas, but our New York showroom is small, and was carefully designed to be a convenience for our consignors and clients. It’s centrally located on Park Avenue, near the corner of 57th Street, one of the top demographic foot traffic locations anywhere in the world. Visitors who come to our Manhattan “jewel box” with an advance appointment will be able to show their items to, and converse with, any of our experts in Dallas or Beverly Hills via video satellite. We also plan to introduce “simulcast“ auctions in New York, Dallas and Beverly Hills. We are first and foremost an auction house utilizing cutting edge technology, as we always have. Our web site, HA.com, has over 500,000 registered bidder members, and gets significantly more traffic than Christies.com and Sothebys.com combined. That’s why over 70% of the lots we sell at auction sell to non-dealers – the highest percentage of any auction house.

We expect our New York location to operate more like a boutique, even though we are by far the largest auctioneer of vintage collectibles in the world. In many categories, such as Illustration Art, Coins, Comics, Currency, and Movie Posters, we outsell all other auction houses combined. Of course one of the most talked-about features of Heritage’s new Manhattan venue isn’t high tech at all: It’s the Heritage Window on Park Avenue, which will feature a continually rotating million-dollar exhibition of highlights from upcoming Heritage auctions, across all of our categories. The items are on display 24/7.

Heritage’s first NYC auction will be an illustration art auction. It will take place in a rented location at The Ukrainian Institute, 2 E. 79th St. and Fifth Ave., NYC on October 15, 2010. The auction will include a fine assortment of art from the best known illustrators including Norman Rockwell, Maxfield Parrish, J.C. Leyendecker and Gil Elvgren.