Glass vases are easily damaged. It’s the nature of glass — it’s delicate. So what does one do if a vase gets chipped? Doesn’t make sense to throw it in the garbage, so you get it fixed. Repairs to tiny chips don’t have much of an effect on value. For bigger chips or cracks, a makeover may be necessary, and that will certainly affect value. The vase will still have some value, but that’s a nebulous area. If it’s sold at auction, the discount could be slight or major. And that’s where the problem lies.

Sometimes the experts at auction galleries know that a vase has had a major alteration and sometimes they don’t. That puts most of the responsibility on your shoulders. If you know what the shape should be, you’ll notice any alterations. Here are a couple of examples. 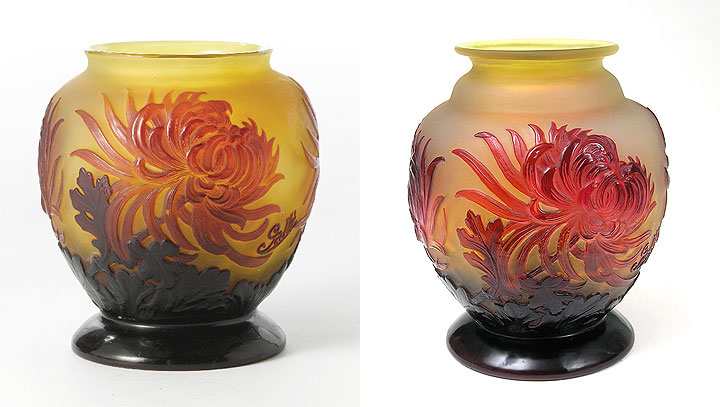 The first is a Gallé chrysanthemum blownout vase that was sold at Sotheby’s New York on March 7, 2012, as lot #211. It was estimated at $6,000 – $8,000 and sold for $7,500, including buyer’s premium. Chrysanthemum is a rare model that would have done much better, if it were perfect. As you can see from the photo, a substantial portion of the top of the vase was missing. My guess is that the buyer was unaware of the problem (and will be pretty unhappy if (s)he reads this blog). 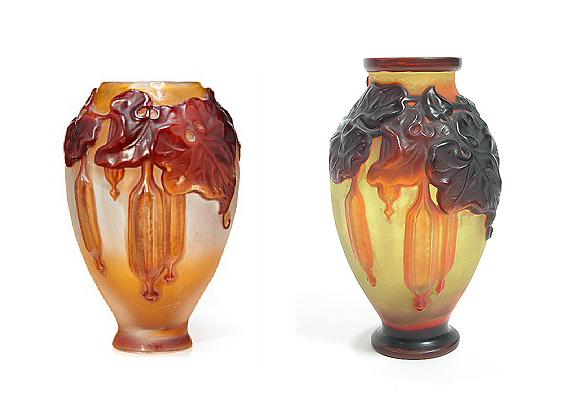 Bonham's vase is on the left

Bonham’s will be selling a Gallé seed pod blownout vase. They know that the top has been cut off, so it’s listed in the catalog as “reduced”, but they apparently don’t know the foot has been “reduced” also. The estimate is conservative at $1,000 – $1,500. This is a vase that is so problematic, it’s anyone’s guess what it may sell for (and it may not sell, if there’s a reserve).

So what is a collector to do? There are only a few choices. The first is to become knowledgeable and learn your shapes. That’s not an easy thing to do, as it takes lots of time and exposure to the vast selection of French cameo glass available. The second is to buy from a dealer who’s knowledgeable and whom you trust. (Hmm, I have a suggestion.) Third, is to deal with reputable auction galleries. Ask for condition reports in advance. Hopefully, the experts in charge will have the knowledge you need. 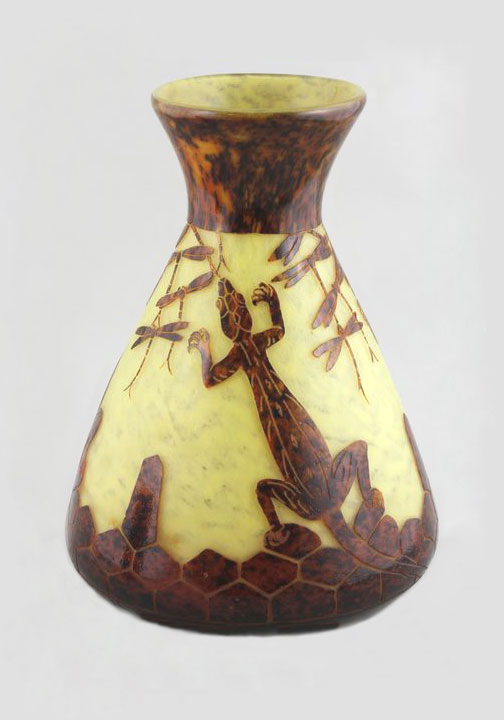