My goal is to publish new posts twice a week — Mondays and Thursdays. However, if you don’t see a new post on Thursday, it’s because I was too busy, so please look for a new one the following Monday. There will not be a Thursday post this week because I’ll be traveling to Europe on a quick buying trip. I hope to return with a few choice items, which I’ll display at my upcoming Florida shows. 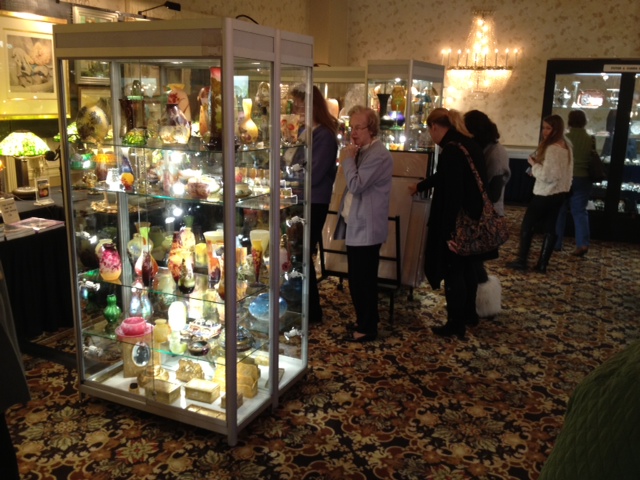 The Birchwood Manor Antiques Show was held in Whippany, NJ, this past weekend, January 7-8, 2012. The show was shortened from a three-day show to a two-day show, based on my suggestion last year to the show promoter, Allison Kohler. Two-day shows have worked great for Stella’s Pier Show in Manhattan, so why not for Birchwood Manor in New Jersey? Here’s the way I see it. When a show is only two days long, more people attend per day. That makes for more energy — like critical mass in a nuclear reaction. Another big plus is that the time commitment for dealers (and the promoter and the rest of the staff) is one day shorter, and that’s a big deal. Everyone wins — the public gets to see the same show; the promoter sells the same number of tickets to the public; the dealers sell the same (or more) with one fewer day. How can you beat that?

Sunday afternoon in my booth

So now that you know the theory, how did it work in practice? Very well, thank you. Attendance was fairly good both days, although a little slower on Sunday, perhaps because of the Giants playoff game. (Go Giants!) Because the show was more crowded, there was more interest, more questions, and thank goodness, more business. 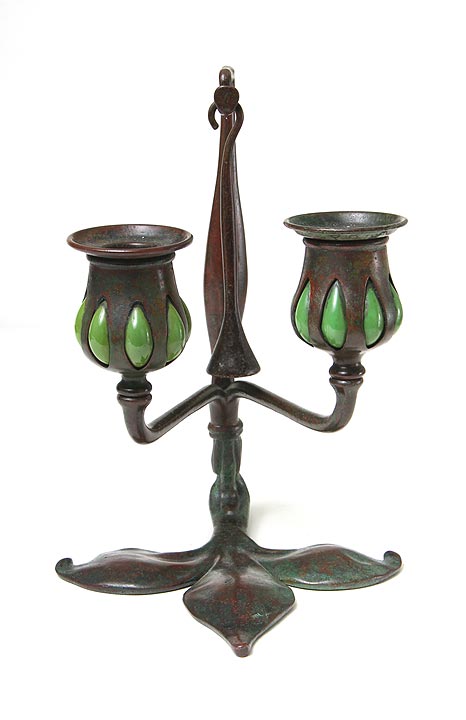 I spoke to quite a few dealers. Most said they had good shows or at least passable. One dealer said she had a better show than she did in Miami Beach last year (wow!) — and that’s with only 14 total hours of selling. I’d say that was a successful show. The show is smaller than it used to be, so I think some of the dealers who dropped out should reconsider and exhibit again. Personally my show went well, with the most interest in French glass, Tiffany lamps and bronze, Fulper pottery and French bronze.

We’re looking forward to our Florida show circuit, which starts with the Palm Beach Winter Antiques Show at the Crowne Plaza Hotel in West Palm Beach on January 20th. You’ve got to admit that antique dealers are not stupid — all of the action moves to Florida in the middle of the winter. By the time we get back to New York, the winter will almost be over. In the meantime, I suggest you make your plans to visit some of the Florida shows. They’re filled with the best dealers and a fabulous array of merchandise that you won’t find anyplace else.