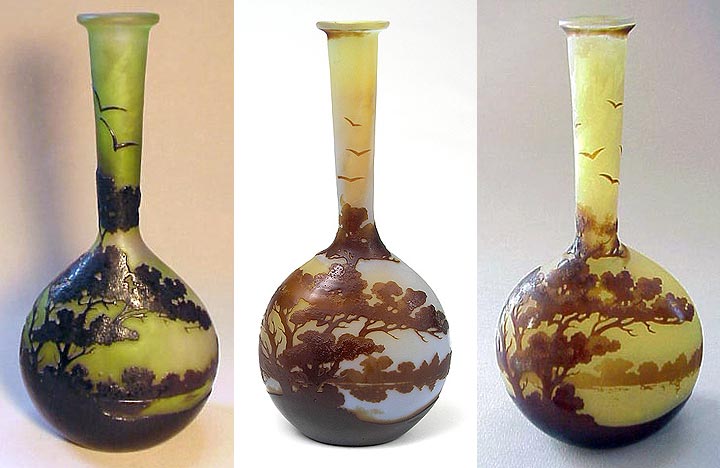 Take a look at the photos above. They are each examples of Gallé scenic banjo vases, meant to be the same. If you look carefully, you can see that although the scenes are very similar, they are not identical. The easiest detail to note are the birds in the sky. The vase on the left has two birds, the one in the center, three birds and the one on the right, five birds. Upon very close inspection, there are many small differences in the trees, branches, reflections, etc. The glass artists started with a prototype that was the standard to copy, but were given latitude to make minor changes, as they saw fit. The colors also varied quite a bit, depending on the applied glass layers. 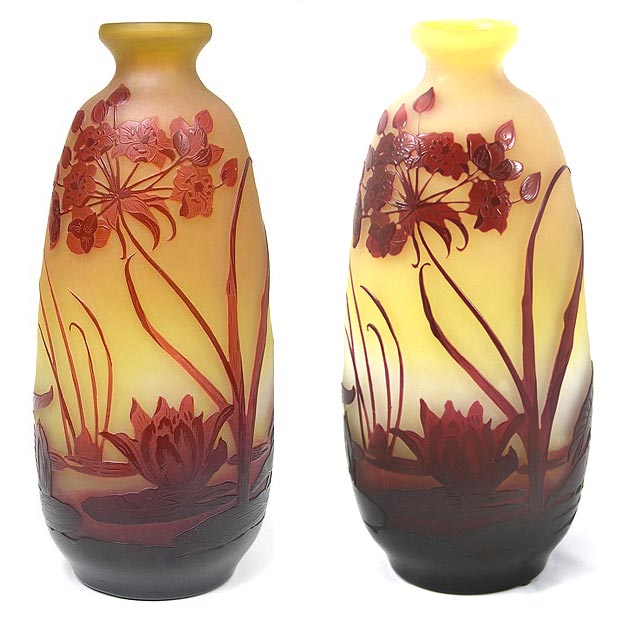 The differences in the two vases above are more difficult to spot, but if you spend enough time, you’ll find plenty. (Kind of like the two similar photos side by side in People magazine.) The easiest place to spot differences are in the tips of the leaves. They are more curled in the vase on the right. These vases are another example that shows that no two French cameo vases are identical.

What I find most striking are not the minor differences, but rather the major similarities. There are so many similarities that it appears to me that perhaps the artists started with stencils and then used hand tools to refine the details, which make for the various differences. I can’t prove my hypothesis, but give me a better explanation and I’ll listen.

Regardless, the total process of producing a quality French cameo glass vase by Gallé, Daum or others was very time consuming. It required many steps and many hours to produce any vase and much more time to produce special vases. I’m very pleased with the continuing popularity of French cameo glass. The earliest French cameo glass vases, produced in the 1890s, are closing in on 125 years old. There are so many collecting areas that have fallen out of favor, that today’s popularity is a tribute to the French artists of yesteryear.

Check out my new Tiffany, Daum, and Gallé acquisitions. I’ll be listing several fine Tiffany lamps in the next few weeks. First to be listed will be a fine Tiffany Studios 7-light lily lamp with beautiful shades and a fine patina. Later I’ll be getting a 20″ Dragonfly and several floral lamps. Also coming soon will be a gorgeous 7″ diam. blue Favrile counterbalance desk lamp. Here’s the link. chasenantiques.com