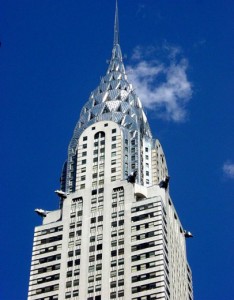 The Art Deco movement began developing in the 1910s during a transitional period from the Art Nouveau movement. It was in full bloom by the 1920s and 1930s. Art Deco is characterized by stylized designs of people and flowers, as well as geometric designs, and is frequently symmetrical. This is the total opposite of Art Nouveau, where asymmetry is the usual rule. European works of Art Nouveau art trumped American examples, but not necessarily so with the Art Deco movement. There are exceptional examples on both sides of the pond. 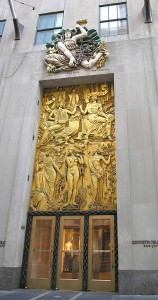 New York City has some of the finest examples of Art Deco architecture in the world. The Chrysler Building, the Empire State Building and Rockefeller Center are prime examples. In collaboration with famous European artists, the French sculptor, Alfred Auguste Janniot, was employed to create a superb Art Deco, gilded bronze entrance to Rockefeller Center. 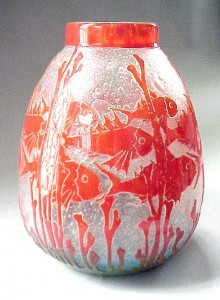 In France, Charles Schneider fully embraced the Art Deco movement and created the finest glass of the period. The designs were stylized and symmetrical. The technique was acid-etching and the vases were signed “Le Verre Francais”. The colors of Art Deco glass are bright and happy as opposed to the mostly true-to-life colors of the Art Nouveau period. 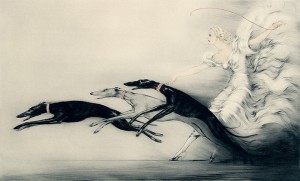 Speed I on the left and Speed II on the right

By the early 1940s, the Art Deco movement had pretty much run its course, but its popularity is very much alive today.