The fall season begins soon with the AVENUE show at the Park Avenue Armory in New York City on Thursday, September 22nd. Since I have less time to write about the interesting things happening in the antiques world, I am posting new blog entries once or twice a week — Mondays and Thursdays. If you don’t see a new post on Thursday, it’s because I was too busy, so please look for a new one the following Monday. 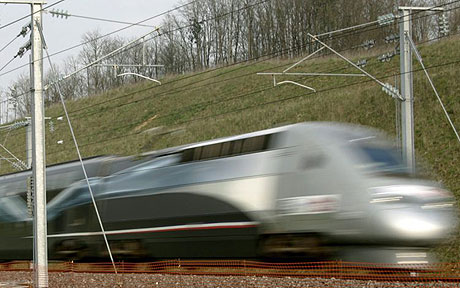 I’m writing this blog post again from the TGV (Train à Grand Vitesse), but this time we’re traveling north at 150 mph. By the time you read this, we’ll already be back in New York. 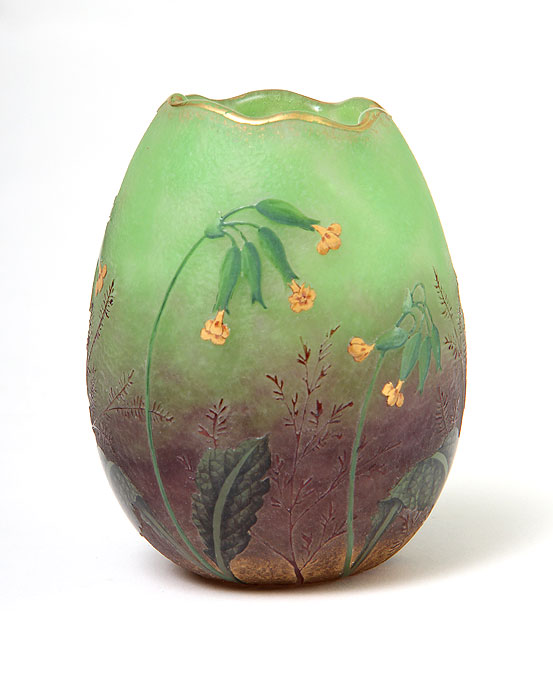 A very fine Daum vase. More to be posted shortly on my website

We’ve just about finished our trip, with all the good and the bad that goes with it. The good part is that we were successful buying. What we didn’t expect was for so many things to go wrong. This has been our toughest trip to France. Everything that could go wrong, did go wrong. 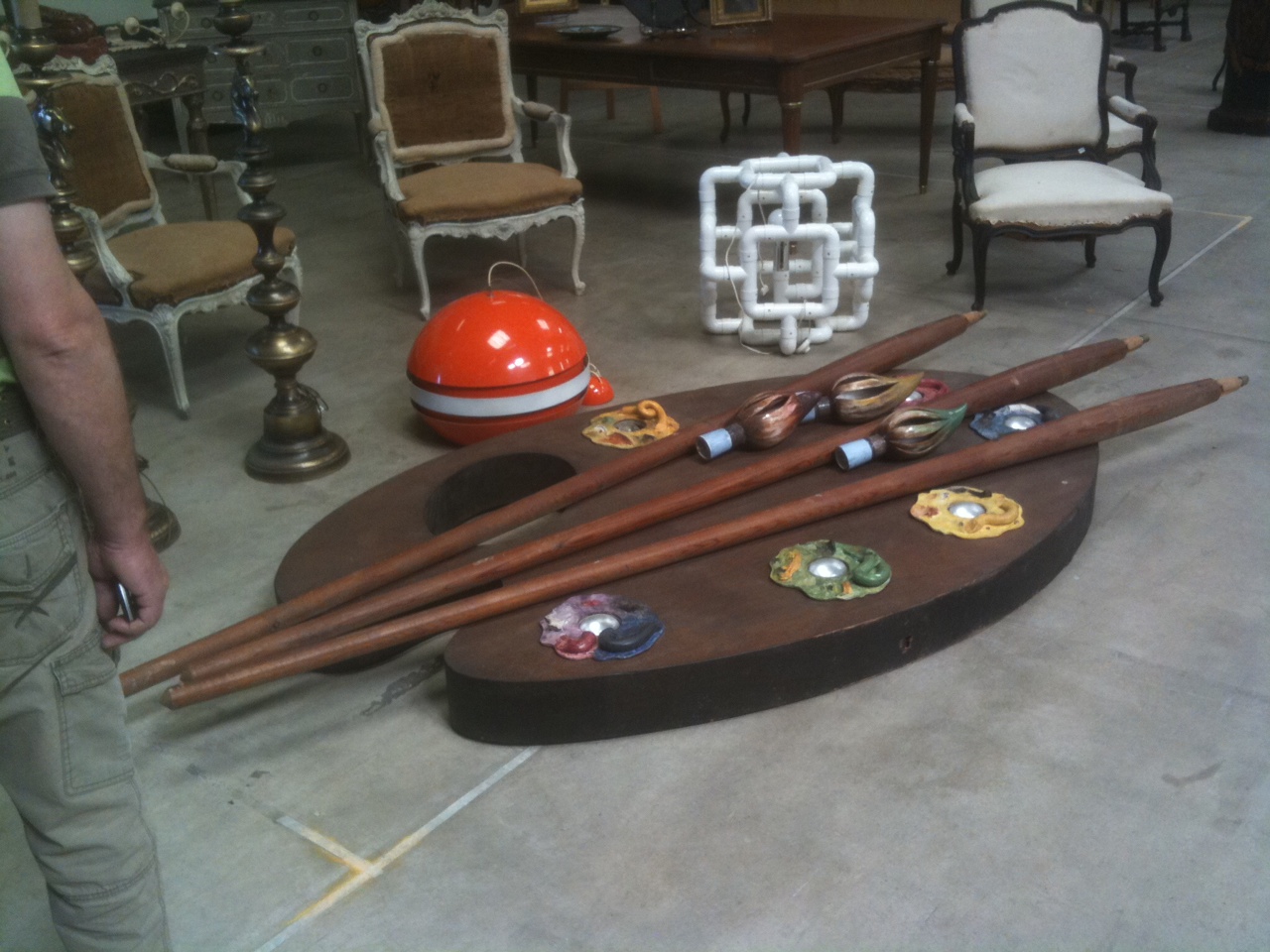 We gave ourselves plenty of time on Sunday for it to be a relaxing travel day. We took a taxi from our hotel to Gare de Lyon. There were few available luggage carts to carry our trunk and suitcases, so we allowed an unofficial porter to use his luggage cart to help us first to a restaurant and then to the train. When I tipped him, he informed us that we should give him double. I refused, and that was the start of a bad day. 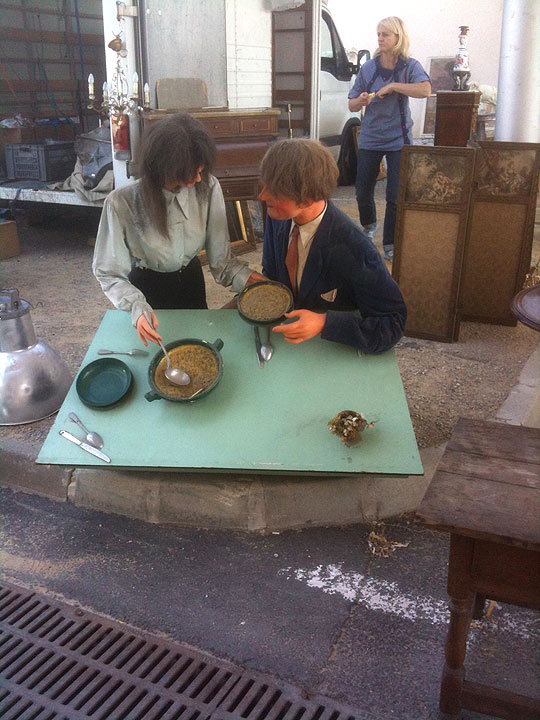 Three-quarters of the way to Montpellier, the TGV broke down. What were the odds? We had to back up to a station and transfer our baggage to another car, where the train decoupled from the broken car. We continued on our way after a 2½ hour delay. When we arrived in Montpellier, we were let out on the second floor platform, where it became an adventure to find the bathroom as the signs were no help. (It was 2 levels down and a u-turn onto one of the platforms). 50¢. What if I didn’t have any cash?

Finding the location of the car rental agency was the next adventure. It was approximately ¼ mile away, with insufficient signage along the route. This time there were no luggage carts of any kind, so we had to carry the trunk and carry-ons, as well as roll our suitcases. Can I impress upon you how difficult that was? When we got to the car rental building at 7:45PM, all of the rental agencies were closed, including Hertz and Avis. Only ours, SIXT, was open for 15 more minutes. Whew!! We arranged for our car, which was at the farthest end (of course) of a large parking lot. I got in and could not start the car for 5 minutes, until I figured out the trick (depress the clutch, step on the brake, press the key case in its slot). Then I couldn’t get the car to move because the parking brake was locked. Grr!! I had to walk back to the agency from the end of the parking lot, where luckily I caught the agent just as he was leaving. He had to walk back with me (to the end of the parking lot) to show me how to release the brake (it was a button on the center console).

I have no idea what we would have done if SIXT had been closed. We would have missed our room and missed the fair — a complete disaster. Thank goodness a few things went as planned. 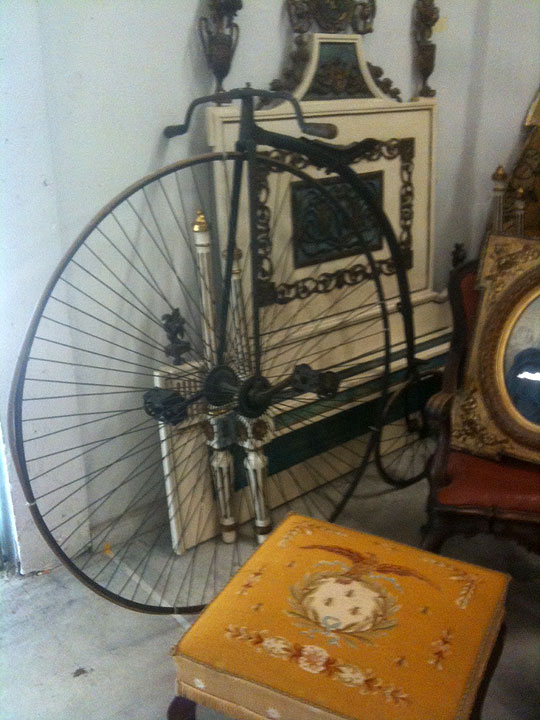 OK, now we were off to our B&B on the outskirts of the city. I programmed my portable GPS as best I could, but it took us down a dead-end road and told us to go straight. We could not find the B&B. Lia suggested we try the built-in GPS in the Audi, in French. It’s not an intuitive device, but we were finally able to program it. The first GPS had taken us several miles away from the correct destination. The Audi GPS got us close, but could not locate the exact place, so we drove around aimlessly, looking for a human. At 9:30 PM on Sunday night, in the small town of Lavérune, there are no people on the streets. I mean none. Finally we found a person getting into a car. He knew the location of the B&B and finally we arrived.

I was concerned that no one would be there on our arrival because we were hours late, but Helène greeted us and let us into our room. The lock on the sliding glass door to the outside did not lock, so it was jury-rigged with a pin. The curtains were too small, so they could not be closed for privacy. I won’t bore you with the details of the other things wrong in the room. 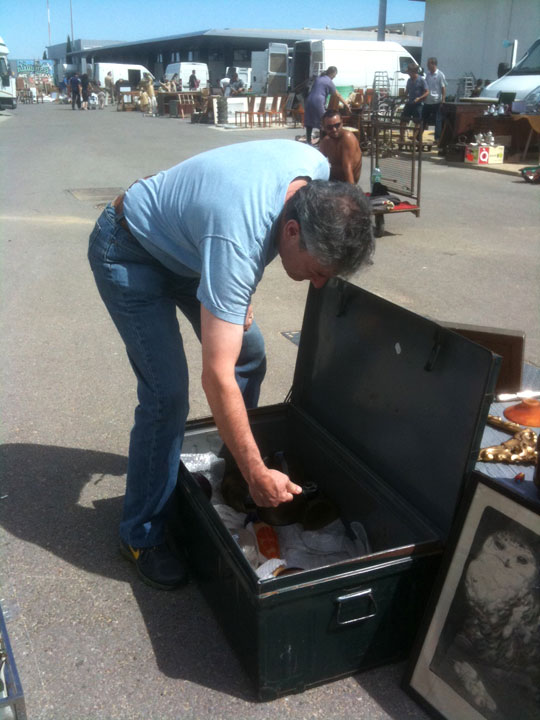 I'm busy looking for a treasure

Now we had to find a restaurant open late on Sunday. We drove around and found an Italian restaurant, but there was no entrance in the front, only the side. We drove round and round trying to find the side entrance, but could not. If you couldn’t find the secret entrance, you couldn’t eat there and we couldn’t. Finally we found an American-style country music restaurant, where we were greeted by a life-size plastic John Wayne. This restaurant would have been a good joke in the USA, but I wasn’t sure if the French were laughing. The food was pretty bad, but we were beggars and beggars don’t choose.

Finally back to the B&B for a few hours sleep and the end of a bad day. We had exceeded our limits. We got up at 4 AM to get to the fair on time and hopefully the start of a better day.

A few days later we had a horrific time catching the TGV northbound. I just can’t get into the details. They’re too fresh and painful as I write this. There were innumerable additional problems on the trip, mainly with driving on poorly marked streets and medieval narrow streets. Oh, did I mention the speeding ticket on the way to the TGV station? My kids claim I’m the slowest driver they know, but I got two speeding tickets in France – one by a road camera and one by the gendarmerie.

Hopefully my stories will give you a greater appreciation of the work that goes into setting up a top quality booth at my shows. Believe me, the merchandise does not fall into our laps. 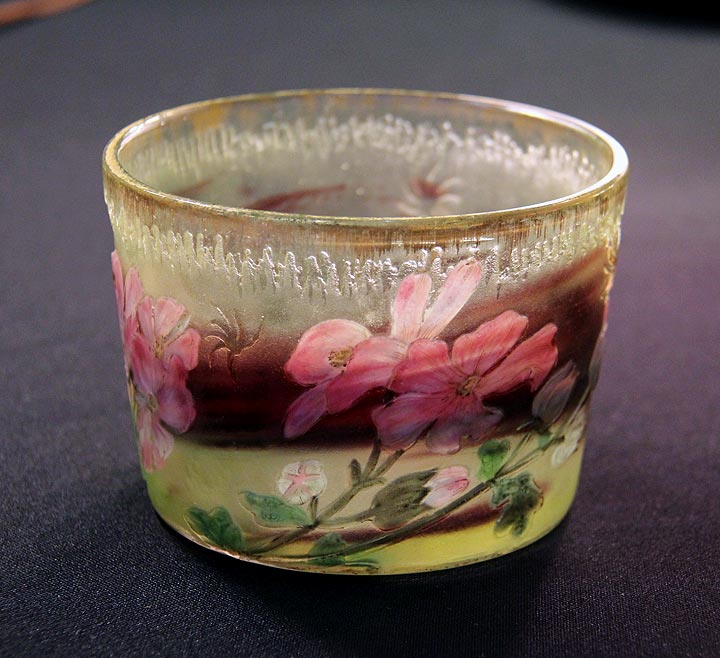 Check my website daily this week. I’ll be photographing all my new Gallé and Daum purchases and listing them on my website. Recently I listed quite a few Tiffany, Handel and Pairpoint lamps and some very rare Louis Icart etchings including Melody Hour and Mardi Gras. There are also several fine Daum vases; a Daum lamp; several Galle vases; and several more Tiffany Favrile vases. Coming soon will be several wonderful European ceramic items by Clement Massier, Zsolnay and Amphora. Here’s the link. chasenantiques.com