Christie’s and Sotheby’s New York locations used to hold two 20th Century Design auctions per year, in June and December. Recently they’ve each added March sales. The overall quality of the offerings is usually lower, as the sales are used to clean up the excess consignments that accumulate. Sotheby’s was first on March 10th, 2011, with Christie’s selling the following day. 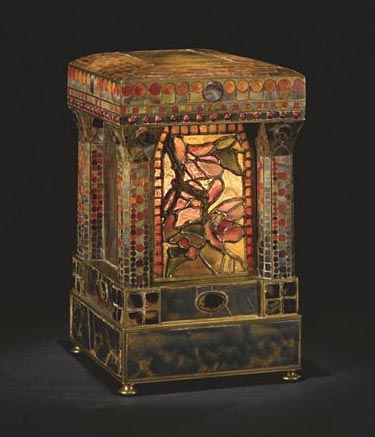 The top lot of the sale was a rare and very unusual Magnolia boudoir lamp with leaded glass flowers and mosaic glass inlay throughout. Estimated to sell for $50-70,000, it sold very near the high, for $86,250, including buyer’s premium. 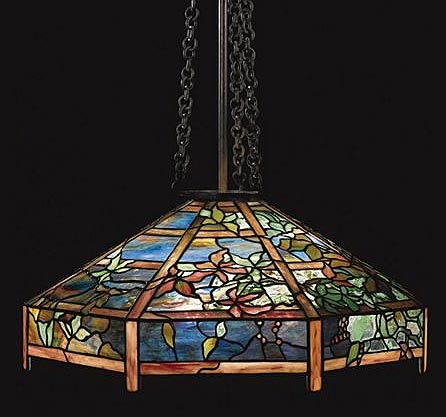 Total sales were $3,551,816, less than the usual $5-7,000,000 for the June and December sales, but still quite respectable. Click on the following link to view the complete results. Sotheby’s 20th Century Design results. 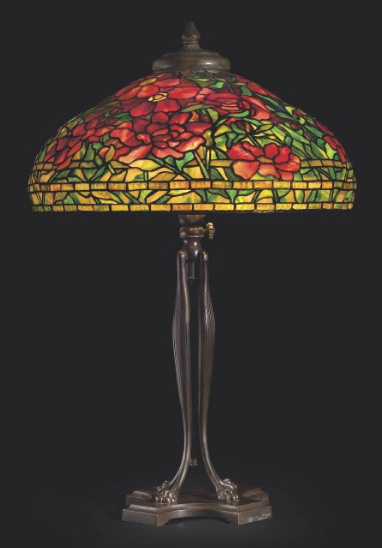 Christie’s sale wasn’t as high-powered as Sotheby’s, so total sales were only $1,435,125. It included a few bargains, in my opinion, such as lot #5, a Tiffany Studios 22″ Peony table lamp. It had been offered in a previous sale, at a much higher estimate, and didn’t sell. Re-offered items have a “stigma” attached to them, many times unjustifiably. This wasn’t the greatest example of a 22″ Peony, but it was still was very good. The flowers were gorgeous, but the background was so-so. Christie’s wanted to make sure it sold this time, so the estimate was lowered to $100,000-$150,000. It sold for $134,500, including buyer’s premium, probably much lower than it would have the first time around, if it had carried a lower estimate and reserve.

The second big bargain was for a beautiful, huge Duffner & Kimberly 24″ Peony floor lamp. Estimated to sell for $50-70,000, it sold for $30,000, including buyer’s premium. That’s a very unusual event at major auction houses because the reserve is usually no more than 25% below the low estimate. This lot apparently had a very low or no reserve. I surely wasn’t expecting that or I would have spent more time examining it at the exhibition.

For the complete results of the Christie’s sale, click on the following link. Christie’s 20th Century Design results.

Check out my new Tiffany, Daum, and Gallé acquisitions. I just listed three important Tiffany vases, including a red decorated vase, straight from a private home. I also listed about ten Daum and Gallé vases plus about 10 Tiffany Pine Needle and Grapevine desk pieces. Here’s the link. chasenantiques.com