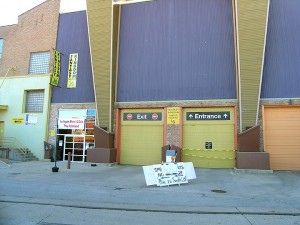 I really had no idea what to expect from this show. The promoter, Rosemary Krieger, decided that the summer antiques show needed a radical change. Attendance at O’Hare the past few years has been steadily declining. So she moved the show to a new venue in downtown Chicago to a building in the Sono section. She’s used this building before for her Modernism show, so she was familiar with it and the neighborhood. 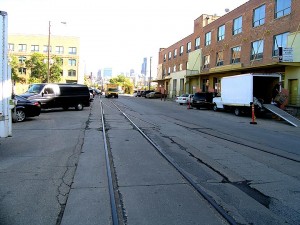 A view of the Sono neighborhood, looking south at downtown Chicago

Personally, the show went well for me, with Tiffany Studios items, including glass, lamps and desk items garnering the most interest. However, every single sale was to an existing client of mine and that was disappointing. Part of doing a show, especially in a new venue, is to meet new clients. I do wish to thank my loyal clients for their business. 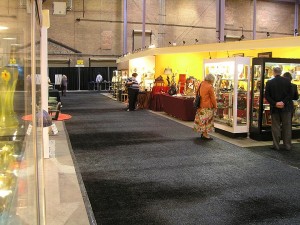 In speaking personally to a handful of dealers at the show I heard the following comments. One dealer complained that it was one of the worst shows he had ever done. Another dealer did moderately well and told me that he thought the show had very good potential. A third dealer told me he did fairly well and a fourth dealer complained about the light attendance at the show, especially on Sunday. She thought the show promoter had done a poor job of advertising. In her view, the promoter should have advertised aggressively, as this was the first time in a new location. She also complained that there weren’t enough signs in the neighborhood pointing to the location of the show.

Show promoters have a tough job. They have to satisfy both the dealers and the public, so it’s a balancing act for them. What the promoters have to realize is that the dealers are their clients, not the public. Promoters need to make life easier for their dealers. That means that the hours of the show should be consistent with giving the buying public enough hours to shop the show but not making the hours so long that it becomes a burden on the dealers. Shows don’t need to open early on Sunday because no one comes early on Sunday. Shows don’t have to be open late on Saturday because the public leaves early to go to dinner or the theater. Irene Stella has it right with the Pier shows in New York City. They’re open to the public only on Saturday and Sunday. Everyone makes it their business to get there during show hours. Part of the reason that dealers do well is because there’s action and electricity at her shows because things happen fast. Make up your mind soon or that item you’re admiring will be gone. It’s good for everybody — fewer days, shorter hours and the same amount of business.