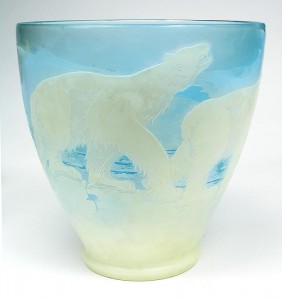 In the early 2000s, I received an email from a lady who had found my website through the Internet.  She told me that she had purchased a vase, signed Galle, and that she would like to have it authenticated.  I told her that my fee for appraisals or authentications was $100.  She agreed and drove all the way from North Carolina to New York to show me the vase in person, which ordinarily would not have been a wise thing to do, but I did tell her that I thought the vase was probably authentic. 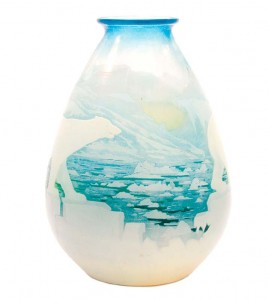 The more desirable version of a Gallé polar bear vase

She told me that she had gone into a shop and spotted the vase on a high shelf.  The owner of the shop said he had purchased an estate and the vase was part of it.  Apparently he didn’t think it was authentic because he priced it at $500.  The lady purchased it because she thought it was pretty and at $500, it was worth it, even if it weren’t authentic.

Upon seeing it in person, I confirmed that the vase was indeed authentic.  It was a rare Galle polar bear vase.  Galle polar bear vases come in two different shapes (or models).   This one was the less desirable of the two, but I for one do not look a gift horse in the mouth.  The owner wanted me to sell it for her on consignment and take a commission upon its sale.  With this arrangement, there was no charge for the appraisal. It took me a while, but I sold it for $30,000.   She was thrilled and I was as pleased as punch with my commission.  This kind of find used to happen more regularly than it does nowadays, but it still does happen.