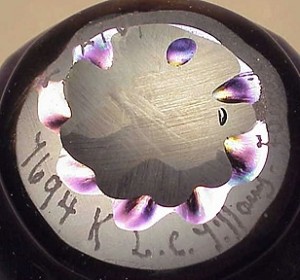 Tiffany Studios numbered their vases. Each number is a unique registry number that corresponds to that vase only. The earliest vases from 1892-3 had numbers and no letters.  In 1894, the  prefix A was introduced with the first vase being A1. Each subsequent vase received the next consecutive number until A9999 was reached and then the next letter, B, was used. When the entire alphabet was completed, the prefix letter was changed to a suffix letter, so the next number after Z9999 would be 1A, followed by 2A, etc. After 9999A, the next number would be 1B, until the entire alphabet would be used up.

Tiffany vases can be dated according to a chart in the Robert Koch book, Louis C. Tiffany’s Glass Bronzes Lamps, on page 56. Prefix A corresponds to 1894, suffix A to 1906, etc.

Items without numbers were generally utilitarian items like bowls or glasses that came in sets. These were part of general production and usually unnumbered. The signatures might be “L.C.T.” or “L.C.T. Favrile” or “L.C.Tiffany Favrile” or some other variation.

A typical Tiffany Studios signature with a shape number

Later items, especially pastel ones, have numbers that do not include a letter. These are shape numbers, not registry numbers. For example, 1881 is a trumpet vase and is repeated on all trumpet vases of the same size and shape. (Credit Gordon (Hank) Hancock for this information. Hank is writing a book on Tiffany pastel glass that will be very useful.)

Compound signatures include the shape number first and then the serial number. This system was developed late into Tiffany production, so it will not be found on earlier vases. The example pictured shows that the vase is shape 1525, with serial number 9008M. To the best of my knowledge, this has never been explained before in writing.