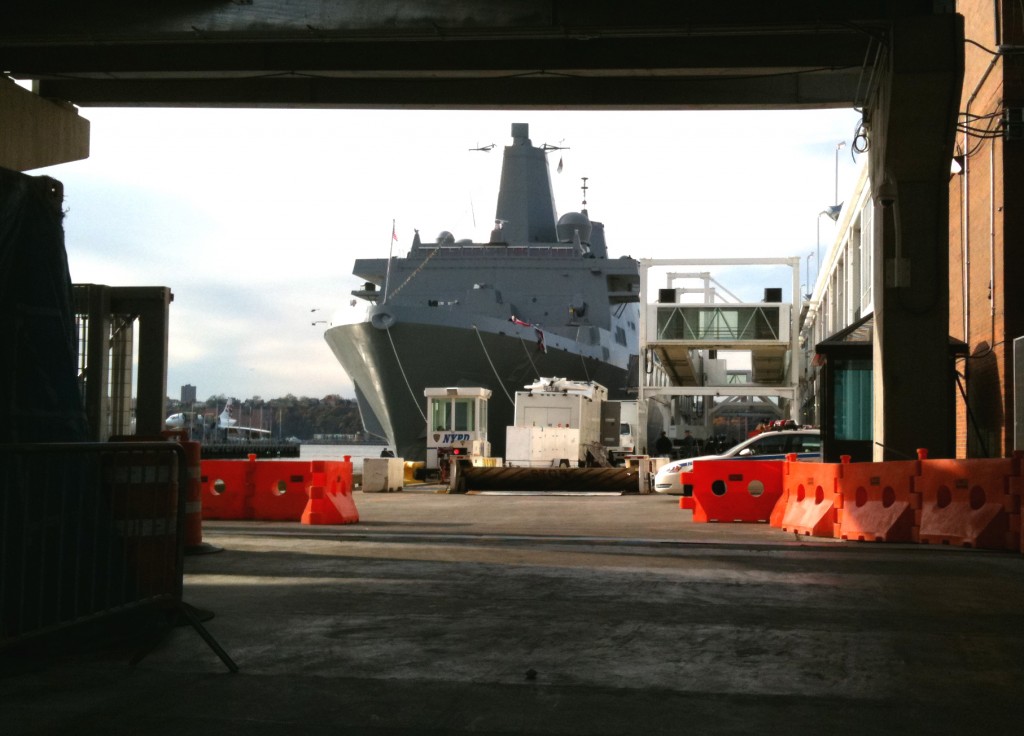 What does an antiques dealer do on his day off? Easy. Take his wife to visit the Navy’s newest warship, the USS New York, while it’s docked in New York. And what a wonderful visit it was. 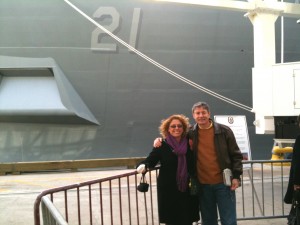 We're standing in front of the bow of the ship

Construction of the the USS New York incorporated 7½ tons of steel recovered from the debris of the World Trade Center, to forge the bow of the ship. Genius! The ship is a San Antonio-class LPD (Landing Platform Dock) with all the latest bells and whistles a modern warship should have. Its main purpose is to deliver marines and their equipment wherever in the world they’re needed. 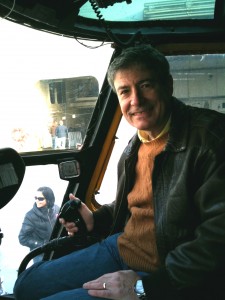 I'm in one of the helicopters on the deck

Today was the first day the general public was allowed to visit, so we came prepared with newspapers and other toys to stand on the long lines we expected. To our surprise, there were no lines. Not sure why, but we were grateful. The weather wasn’t a factor because it was beautiful. I suspect as word gets out, there will be many more visitors on the weekend. 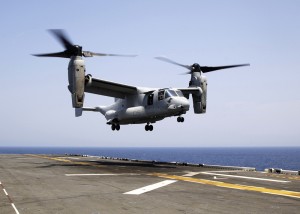 The first thing we noticed was the security — young navy security guards with machine guns stationed up front. Navy and Marine personnel everywhere — all very poised and very friendly. They seemed genuinely pleased to see us and show off their impressive new ship. We visited two equipment decks with troop carriers and an Abrams tank, which we were allowed to crawl over and into. It got more interesting on the top deck, where helicopters and a VTOL (Vertical Take-Off and Landing) plane, the V-22 Osprey, were on display. The Osprey can take off and land like a helicopter and then rotate the engines to fly like a standard airplane. Wow! 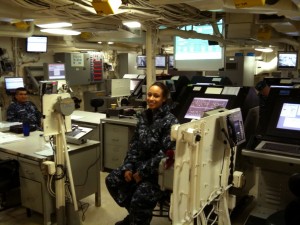 The engineering control room of the USS New York

It was all fascinating to me, but not quite as much to Lia. She was more interested in the human aspects of the ship. How do the sailors sleep and eat? So I mentioned this to one of the sailors, who by sheer dumb luck, happened to be the Chief Engineer of the ship, third in command. He invited us on a personal tour of the entire ship, from the mess hall to the engine room. What a treat! He couldn’t have been nicer, answering all of our questions while showing off his ship. So a big thank you to Lt. Commander Harris of the USS New York.

It was a fine day. We left with a feeling of pride in the fine young men and women of our armed forces. If you’re from the greater New York area, I strongly suggest you visit the ship. You have until this Sunday. For complete information, click on this link. USS New York

By the way, did you watch the Yankees win the World Series? At one point, the camera zoomed in on the commander of the USS New York (who is a native New Yorker), seated next to Mayor Bloomberg. About 30 sailors were guests of the Yankees.