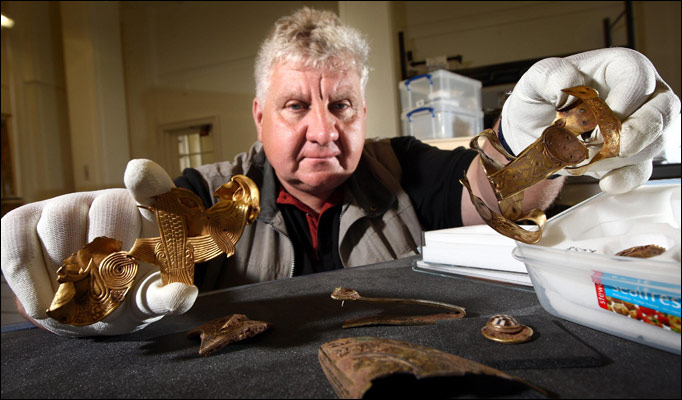 Terry Herbert with some of his discovery

For 18 years, 55-year old Terry Herbert’s hobby was to use his metal detector to search for buried metal objects in the ground. On one recent, very special day, he asked permission of a farmer friend in Staffordshire, England, to search his land, and discovered the largest gold and silver treasure trove of Anglo-Saxon artifacts ever discovered. The approximately 1500 objects contain 11 pounds of gold and 5½ pounds of silver, and are believed to date from the 7th century. A government official has declared the find to be a treasure, which means that it belongs to the crown. However, Terry Herbert and the farmer will share in the value, to be determined by the British Museum, which is likely to be in the millions of dollars. 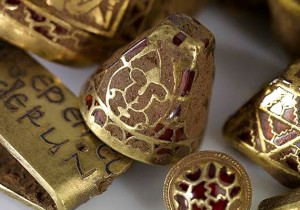 A few of the extraordinary items

Ultimately museums will be allowed to bid on the objects, where they will be studied and displayed. The first display of a number of the items was held at the Birmingham Museum and Art Gallery, where the objects are being stored. Archaeologists can’t wait to get their hands on the objects for study. They are all war-related, including sword fittings, sword hilts and helmet sections. The quality of the craftsmanship is such that the objects are believed to have belonged to Saxon royalty, with many inlaid with semi-precious stones. 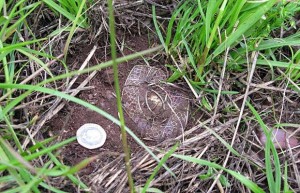 Some of the objects as found originally

It’s likely that the history of this time period will be rewritten as a result of this unprecedented discovery.