This is something that doesn’t happen every day. An auction gallery thinks so little of a vase that it’s not advertised, combined with a Baccarat vase to raise the value of the lot, sold near the end of the auction, estimated at $1/150, and sold for $28,200. Now for the whole story. 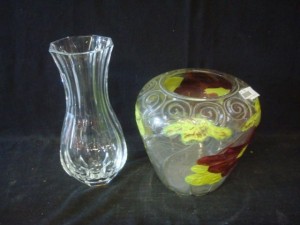 The “Arts & Crafts Vase” was not Arts & Crafts, but rather Art Nouveau, and more importantly a fantastic, stupendous, incredible Tiffany Studios Favrile, wheel-carved cameo vase. The vase was not signed, only numbered, so the auctioneer had a slight excuse for not knowing the true origin. However, the QUALITY was so fantastic that the auctioneer was negligent in not advertising the vase. Had he included a photo of the vase in his advertising, the cognoscenti would have recognized it, with a better result for both the consignor and the auction house.

We have a situation where the auctioneer is proud of his achievement, as evidenced in an article entitled “Kitchen Discovery – Tiffany Bowl Brings $28,200 at Clarke’s”, printed in the October 16, 2009 edition of Antiques and The Arts Weekly (known as The Newtown Bee), on page 14. The auctioneer should be embarrassed. He did a disservice to his consignor, selling a $100,000 Tiffany vase for $28,200. Congratulations to the bidders at the auction who recognized the vase and bid accordingly. Big sigh! I wish I had known and been one of them! 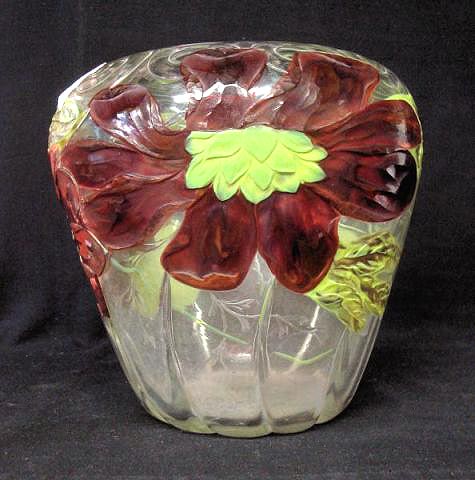 Just look at the quality of this vase. The flowers have been padded with molten glass in the making. After the vase cooled, it was extensively wheel-carved over the entirety of the vase to achieve the fantastic details. Folks, it doesn’t get any better than this. It’s a Tiffany masterpiece.