Show exhibitors don’t have much say about when and where show promoters decide to put on shows. Consequently there are big holes in my schedule when there are no good shows. Some gaps make sense, like the month of December. Most folks are more interested in Christmas shopping than in attending antique shows. Many of the antiques I sell are too expensive for most people to give as Christmas gifts. But plenty of the items are not too expensive, such as Tiffany desk objects, which make great gifts.

I’ll be traveling back to the Chicago area for two shows in the month of October. The first is at the Merchandise Mart in downtown Chicago. That’s a fun show to do because everything happens smoothly and for the most part, the dealers are treated very well. The public, mostly well-heeled downtown Chicagoans, gets a chance to see a top-notch show of national stature. I always look forward to this show.

A couple of weeks later, I’ll be back in Chicago, but in the suburbs of Arlington Heights at the racetrack. There’s a very nice show there, under new management. It will be interesting to see what changes happen to the show as a result. I’ll also find out whether I’ll be exhibiting too many times in the same city within a relatively short period of time. I last exhibited in downtown Chicago the week before Labor Day. For the most part, the folks who attend the downtown Merchandise Mart are different than those who attend the Arlington show, so I’ve got my fingers crossed. I guess I’ll have to revise my show schedule for next year if three times within six weeks is too much. 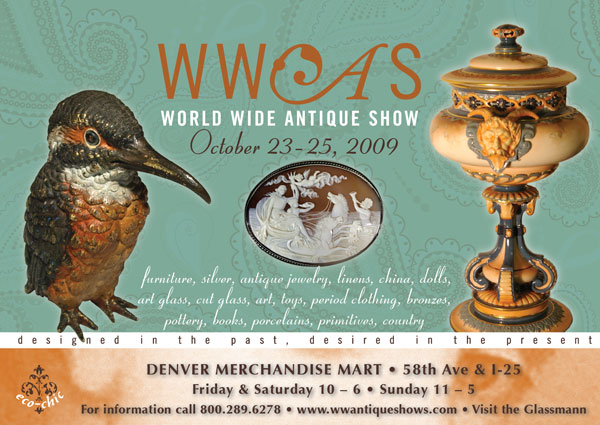 Then on to Denver in the latter part of October. I just exhibited there for the first time in July and got a good reception from the folks there. Again I worry that maybe I’m returning to Denver too soon. I’ll let you know after the show. 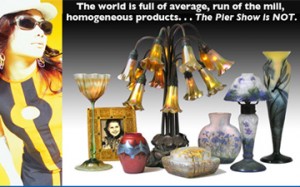 The final show of the year will be the NYC Pier Antiques Show. That’s usually a big deal. The show is exciting first because it’s in New York City, but there are other important factors. The promoter of the show, Irene Stella, made some canny decisions years ago that seemed to have worked in the show’s favor, the most important of which was to make the show only two days long. Lots of people line up early on a Saturday morning to get a chance to be first. The crowd builds up quickly, which makes for a busy show. New Yorkers are famous for making their minds up quickly, so many sold signs start showing up in the show. That makes other people make up their minds quicker so as not to lose the items they’re admiring. Makes for a more exciting show than the usual one.

The second good decision was to seek a truly diverse group of exhibitors. It’s possible to buy a $100,000 Tiffany lamp or a $10 item of antique clothing and everything in-between. A good mix makes for a fun show. Lots of decorators attend the show looking for that special item. The show has been running for years, so people know to travel to New York, with some coming from as far away as Japan.