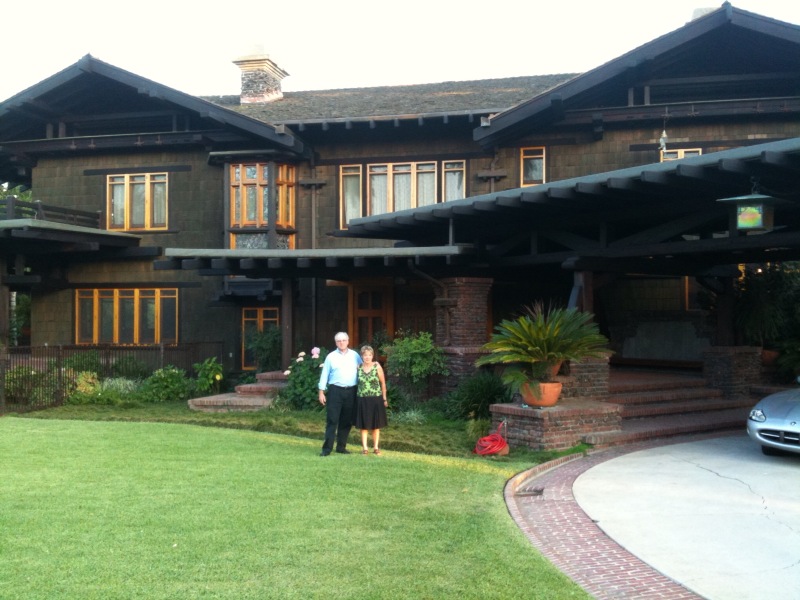 Harvey and Ellen Knell in front of their home, the Blacker House 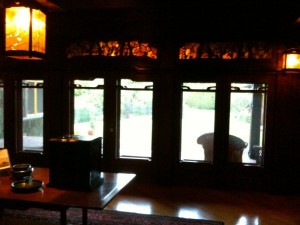 The entry hall of the Blacker House

The Blacker House was named after the lumber magnate, Robert Rue Blacker. It’s an original Greene & Greene house that dates to 1907. It was magnificently appointed with custom furniture, lighting, doors and windows, all in the finest Arts & Crafts manner. The Blackers lived there until 1944, when Robert Blacker’s widow Nellie, died. Subsequently, the house was owned by several people — one of whom sold all the furniture and the fireplace surrounds. Later in its history, the property was subdivided, but the main house remained intact with all of its light fixtures, windows and doors.

The next owner was Marjorie Hill and her husband, who lived there for about 35 years.

In 1985, a Texas collector, Barton English, purchased the home from Marjorie Hill for approximately $1,000,000. Without ever living in the house, he started stripping everything he could, including about 60 light fixtures, the magnificent stained glass entry doors and most of the stained glass windows. After selling just a few of the light fixtures, he recouped all of the money from his purchase of the house. The Pasadena locals became enraged and referred to this travesty as a “rape”. They forced the city to pass an emergency ordinance, which stopped English in his tracks. Had he been allowed to continue, the tile fireplaces would also have been removed, as well as the wood paneling, etc.

One more family owned it before Harvey and Ellen Knell bought it in 1994. Since then, the Knells have spent considerable time, effort and money in lovingly restoring it to its former glory, including faithfully reproducing the missing light fixtures and furniture. 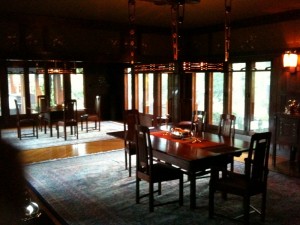 The dining room of the Blacker House

The Knells were kind enough on this trip to Pasadena, to invite us to view their magnificent home.  What a treat!  They did extensive research to uncover the original details and hired today’s finest craftsmen to recreate them.  Whatever had been ruined by neglect, earthquake or other disaster, both natural and man-made, was reversed.  In some cases, the Knells were able to buy back the original furnishings or architectural elements and restore them to their original places in the house.   Unfortunately for the Knells, some of the items, like the octagonal lighting fixtures in the living room, have become prohibitively expensive, making it nearly impossible to restore all of the items to their original locations. 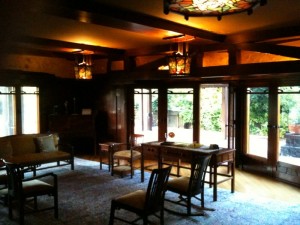 The living room of the Blacker House

So a big thank you to the Knells for their gracious hospitality.