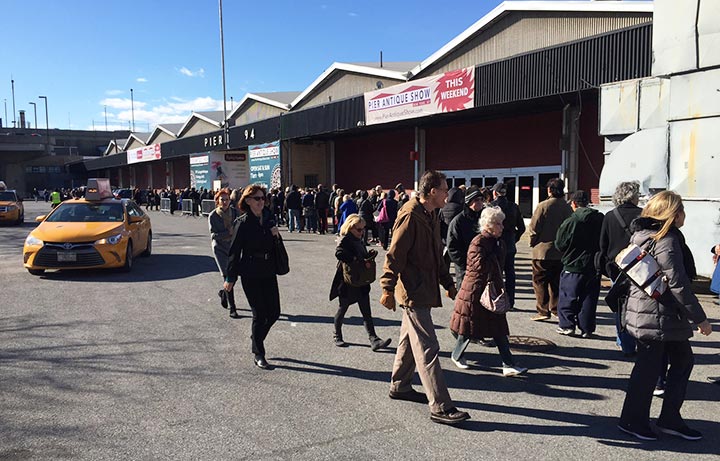 There was quite a crowd at the opening on Saturday morning

The NYC Pier Antique Show ended yesterday, November 15, 2015, after a brief two-day run. Interesting things to report. 1. This may be the last Pier show. 2. Business was good. 3. We were robbed.

1. Management was unhappy that not enough dealers signed up in advance to exhibit at this November Pier show, so they are considering canceling it permanently. According to Katrina Canady, the show director, many dealers tried to get booths at the last minute for half price. They hoped the promoters would be desperate and agree to reduced rent. Katrina told me US Antique Shows does not discount booths and turned away many dealers. It’s my understanding that US Antique Shows will not hold a Pier show in November, 2016 unless they get tremendous interest from dealers well in advance. Contact them and let them know you want to exhibit next year or the NYC Pier Show will become a memory.

I also heard a rumor that the property that the piers occupy has been sold to a developer who will put up waterfront high-rise residential buildings. Unfortunately if that’s true, the show is toast, no matter what. It’s very difficult to get the truth, so if you know something for sure, let me know. Time will tell. 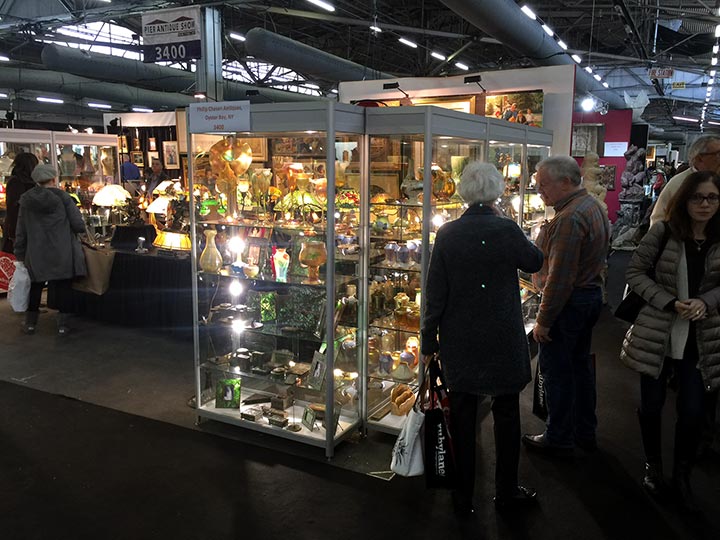 Saturday morning outside my booth

2. Attendance was strong at the opening on Saturday and business was really good. Sunday started off slowly and then got busier as the day progressed. We had a really good show except for #3 below. We sold items across the board, including French glass and Tiffany lamps and glass. 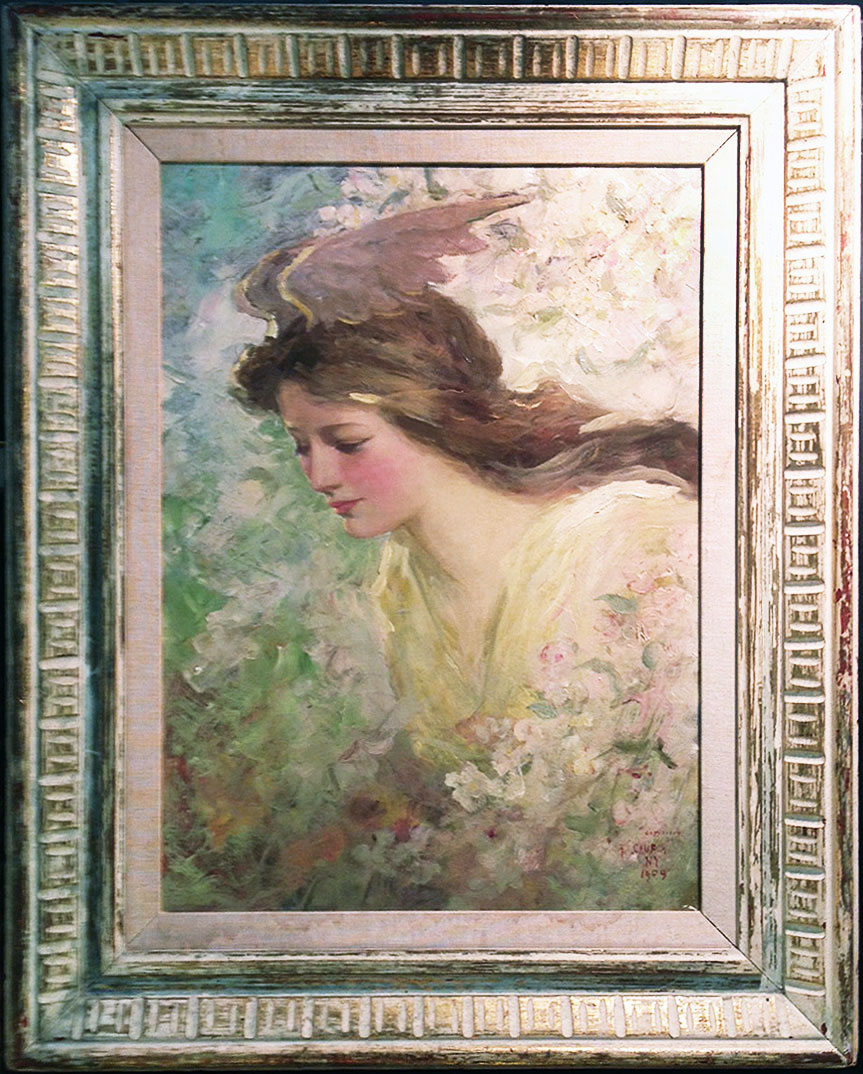 I solicited comments from several dealers and got the following responses. They are not representative of the entire show, but merely from colleagues who I know personally. Alan & Adele Grodsky, lamp and glass dealers, Davie, FL, told me “We did pretty well. The gate was good both days and we did business on both days. We hope they run the show again.” Steve Morrow, Steve Morrow Antiques, glass dealer, Hedrick, IA, wasn’t very pleased. “My show was just average, but the buying was good.” George Sorensen, George Sorensen Antiques, Minneapolis, MN, couldn’t have been happier. “My show was very good and busy.” Jeff Myers, Myers-Huffman Antiques, 20th Century decorative arts dealer, Chickaloon, AK, was singing the praises of the show. “Our show was great on Saturday. The crowd was good and we sold to new clients, including decorators and designers.” David Kozloff, Kozloff & Meaders, decorative arts & jewelry dealers, Pittsburgh, PA, told me “Our show was the same, consistent with other shows.” Bill Holland, Hollandarts.com, Louis Icart and Tiffany desk set dealer, West Chester, PA, was a happy camper. “Tiffany desk pieces sold well. We had lots of interest in everything. There were a lot of be-backs who actually came back. Business was better on Sunday.” Two dealers who didn’t fare well were Peter Boehm, Dualities, decorative arts dealer, Larchmont, NY. “My show wasn’t good.” and William Isen, The Great Dane Collection, art dealer, Philadelphia, PA. “Terrible. We sold two pieces to one person we already knew. There were no new buyers.” 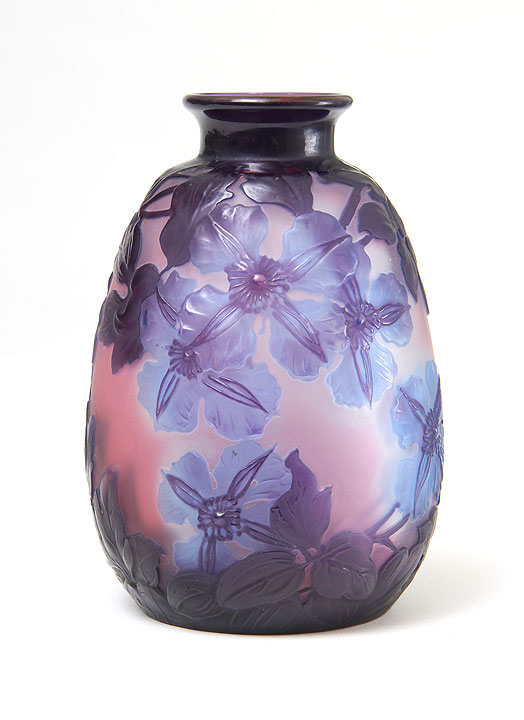 This is very similar to the Gallé clematis blownout vase that was stolen at the show. I had just bought the vase the day before, so I don’t have a photo of the actual vase.

3. An organized group of thieves targeted the show and three dealers, including me, were hit. I lost three French cameo vases, Bill Holland lost a 10″ Tiffany Favrile glass shade, and another dealer lost a large Tiffany Favrile vase. The thieves were brazen and took items right out of the cabinets. The usual modus operandi is for someone to distract the dealer, one person to spot trouble nearby and one person to do the stealing. My guess is that at least three people were involved. We all reported the incidents to the police. Please be on the lookout for these items. There will be a reward for the return of the items and for the arrest and conviction of the perpetrators.

Unfortunately poor security at the show was a contributing factor. None of the dealers knew thefts were happening until it was all over. At other shows in the past, there were security announcements. “Mr. Roberts, come to the show office”, or similar, was a code message to the dealers that thieves were operating on the floor of the show. US Antique Shows did not have such a system and needs to incorporate it into all of their future shows. It’s really easy and effective. Secondly, at 7 PM, when the show closed, the security staff was reduced drastically. Anyone could enter and exit the show openly with contraband and nobody would stop them. That’s exactly when the security should have been beefed up instead of reduced. US Antique Shows — you need to step up your security game!

Lastly I want to express my heartfelt sympathy to Parisians and to all the citizens of France. These are terrible times when ordinary citizens have to worry about their security. We have to do whatever is necessary to combat Muslim extremism before it spreads to still more cities, including here in the US.

I’ve listed many new items on my website and will continue to list many new (and great) items that I’ve recently purchased, both on our buying trip and elsewhere. We have a treasure trove of goodies, so please check my site often for updates.