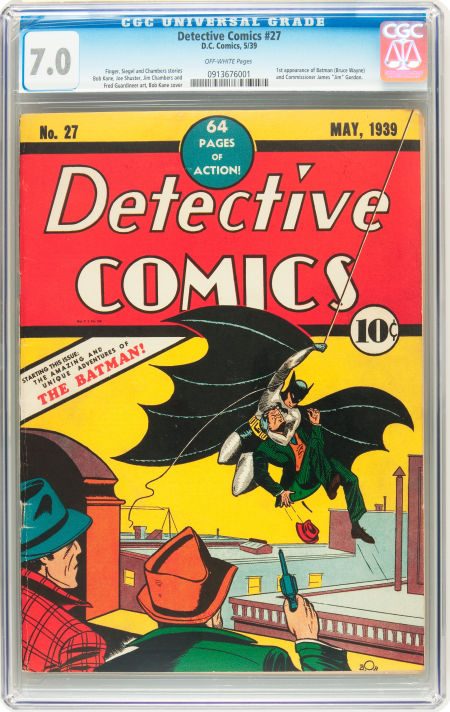 Detective Comics #27, the first appearance of The Batman, Heritage lot #91114

When Robert Irwin was 13 in 1939, he visited the local newsstand in Sacramento, California, to buy a comic book. Little did he know at the time the good fortune that would come of that purchase.

The comic book was Detective Comics, #27, the first appearance of The Batman. Irwin paid 10¢, the standard price for a comic book in 1939. He put it away and forgot about it for 65 years, until 2004, when he discovered it in a box together with 1930s National Geographic and Popular Mechanics magazines. A collector found out he had the comic book and offered him $100,000. Irwin made another good decision in deciding not to accept the offer.

Irwin’s comic was graded 7.0 by Certified Guaranty Company. Heritage twice previously sold Detective Comics, #27 in better graded condition. On Aug 4, 2010, an example, graded 7.5, brought $657,250 and on February 27, 2010, another, graded 8.0, brought an incredible $1,075,500. When it comes to selling graded objects, like comic books and coins, condition is key. Slight differences in condition can make for dramatic differences in value.